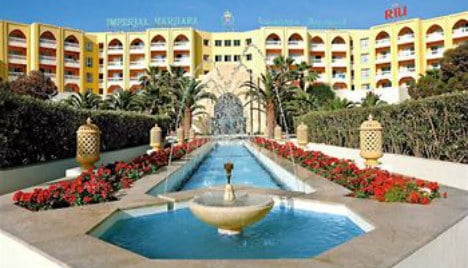 At least 27 people are dead after a terror attack on a Spanish-owned hotel in Tunisia. Photo: riu.com

As details began to emerge about the attack thought to have been carried out gun men armed with kalashnikovs, the Spanish Prime Minister called a crisis meeting against the jihadist threat.

Mariano Rajoy confirmed that the one of the hotels where the beach attack was carried out belonged to a Spanish hotel chain, in Sousse,  about 140 kilometres (87 miles) south of Tunis.

Speaking in Brussels Rajoy extended his “condolences and solidarity” to both France and Tunisia over the attacks meanwhile Spain's Interior Ministry confirmed that an emergency meeting had been called for 4pm against jihadist terrorism.

The hotel is understood to be the Imperial Marhaba in the Port El Kantaoui resort, a five-star hotel belonging to the Mallorca-based RIU group.

The Tunisia Interior Ministry reported that there were at least seven gunmen involved in the attack. Of those, the ministry said one had been shot, two were detained by police and a further four were thought to be hiding inside the Imperial Marhaba hotel.

RIU confirmed the attack at the Imperial Marhaba:

Official Statement: Riu Imperial Marhaba in Tunisia, has been affected by the attack occurred this morning http://t.co/ypvW4QqN77

“We are collecting all the information about the incident and are in permanent contact with the authorities in order to have full information about what happened,” the company said in a statement posted on their facebook page.

“We would like to extend our sincere condolences to the victims and their relatives, and are awaiting to know more about this incident.”

This map shows where the shooting happened:

Although there was no exact information about the nationalities of victims of the attack, the victims were thought to be mostly German and British, according to local media with reports suggesting that there were no Spanish tourists registered at the hotel.

The attack happened within hours of an attack outside a factory near the French city of Lyon in which a man was decapitated and two others injured by a man linked to Islamic extremism and carrying an Islamic State (Isis) flag.

The attacks comes as 25 were killed and 202 injured by a bomb at a Kuwait mosque on Friday, an attack claimed by Isis.