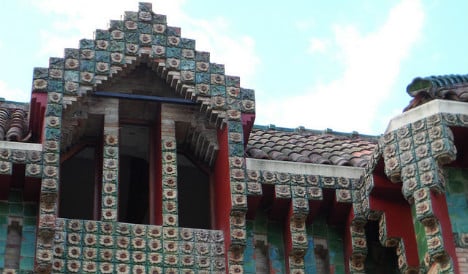 Detail of the Capricho de Gaudi in Comillas. Photo: Chris/Flickr
On the anniversary of his birth, we explore the lesser known works of the man dubbed 'God’s architect'.
The Church of Colònia Güell

Intended as a social and religious hub for the factory workers of Santa Coloma de Cervelló, a small Barcelona suburb, the Church of Colònia Güell was commissioned by Count Eusebi Güell at the end of the nineteenth century. Though funding issues halted progress on its construction, meaning only the crypt was completed and the project remains unfinished to this day, the church is described as “one of the most representative works of Antoni Gaudí”. With crooked columns and an elaborate ceiling showcasing Gaudí’s signature modernist aesthetic, the church was made a UNESCO world heritage site in 2005.

You may be forgiven for thinking that all of Gaudi's masterpieces were in Barcelona but in fact one of Gaudí’s earliest projects was a villa designed in 1883 for the Marquis of the Cantabrian town of Comillas. The building, for which Gaudí employed an oriental style uncharacteristic of his later work, was again left unfinished due to its owner’s eagerness to move in early.

Another of Gaudí’s early commissions, Casa Calvet in central Barcelona neglects the architect’s experimental, modernist style in favour of more conventional, symmetrical design. Originally built as a commercial property for a textile manufacturer, the building is now home to an eponymously named restaurant which professes to “blend state of the art cuisine with the beauty of Gaudí’s work”.

This mansion, located in the Raval district of Barcelona, represents another of Gaudí’s commissions for industrial entrepreneur Eusebi Güell, and was completed in 1888. With a set of vast anterior arches housing intricate iron gates, the exterior of the building was used as a location in Michelangelo Antonioni’s 1975 film The Passenger, in a scene where Jack Nicholson first meets Maria Schneider.

Gaudí was commissioned in 1884 to design this monument in the grounds of the Royal Palace of Pedralbes, Barcelona, then a residence of the Spanish Royal family. Shrouded by a bamboo grove, the fountain fell into obscurity and was forgotten about until the 1980s, when it was rediscovered and restored.