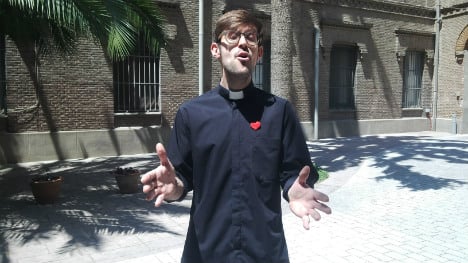 The Voice, the world famous reality television singing competition is a big deal in Spain. The premiere of its third series, in March 2015, was watched by nearly 5 million Spaniards who were in for a surprise when contestant Damián Maria walked onto the stage.

Sporting trendy glasses and a floppy fringe, Damián Maria looked like any young hipster Spaniard, except that is, for his dog collar.

“I had wanted to apply for the first series of The Voice but I was very nervous,” the 28-year-old priest said when he met The Local in his parish in central Madrid.

The young priest was eventually inspired to apply for series three by another religious reality show star – Sister Cristina Scuccia, the Italian nun who won The Voice Italy in 2014.

“I think that God has given me a gift with my voice so I know that I have to share it,” he told The Local.

Damián Maria grew up in Granada, where he began singing at an early age with his flamenco singer grandmother. He loved watching The Sound of Music with his two sisters and harboured dreams of becoming an actor or singer.

But in the end he answered a different sort of calling, when he decided to join the Congregation of the Most Holy Redeemer, a Roman Catholic missionary order founded by Saint Alphonsus. In 2013 he was ordained as a priest.

Father Damián has worked as a missionary in India and Honduras but never gave up his first love: music.

In a traditionally Catholic country such as Spain, was Damián not worried the conservative church would disapprove of him entering a reality television programme?

“I did ask the bishop of Madrid if it would be alright for me to apply,” said Father Damian, “he gave me advice but never once tried to stop me from applying for the programme.”

On The Voice, contestants perform on a stage in front of a studio audience and four judges, who sit with their backs turned to the performer, to make sure they judge purely on vocal talent. If they like what they hear, they spin their chairs around.

“The blind audition was the most nerve-wracking part for me,” said Father Damián, “I was just really hoping that at least one judge would turn around.”

The faces of the judges once they did turn around and were met with the sight of a handsome young priest were a mixture of surprise and delight. The priest became an overnight sensation, thanks in part to his use of social media. Twitter and Facebook fanclubs sprang up, using Father Damián’s catchphrase 'siente los latidos' or feel the beat, while the Spanish media christened him the “hipster priest”.

And far from being a mere favourite of the devout, Father Damián has built up a strong fan base among the non-religious too.

“That was a surprise,” he told The Local, “lots of people have been sending me messages saying that they are not at all religious but they loved watching me on The Voice.”

And although you might be forgiven for expecting the more traditional members of the Spanish Catholic Church to struggle to embrace the appearance of one of their own on a popular culture television show, Father Damián has found support even within the upper echelons of the religious organization.

“Some people in the church don’t understand why a priest would go on television, but the vast majority have been positive,” Father Damián said.

And he credits Pope Francis with creating an environment in the church where it is possible for a priest to engage with the people in this unconventional way:

“I don’t think I could have gone on The Voice if Pope Francis had not been pope,” he told The Local.

For Father Damián, appearing on The Voice is a way of opening up the church,

“I think now, especially young people, are looking at the church in a different way because some religious people, Sister Cristina in Italy or Father Damián in Spain are normalizing the church.”

And when he looks to the future what does Father Damián see?

“I am working on an album, I will carry on being priest and perhaps, who knows? But I would love to represent Spain in Eurovision.”