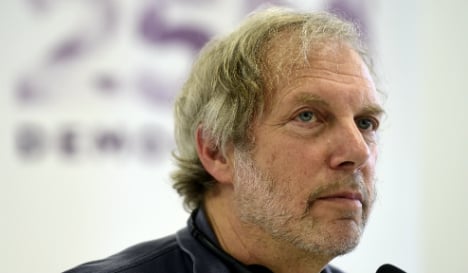 US economist Robert Pollin has been drafted in by Podemos to launch a new green energy plan. Photo: Pierre Philippe Marcou/AFP

Vying to drive out Spain's governing conservative Popular Party in the year-end general election, Podemos turned for its energy investment programme to Robert Pollin, who has worked as an adviser to the US Department of Energy and the United Nations.

In a study presented in Madrid with Podemos leaders, Pollin calculated Spain could create 320,000 jobs a year by investing in renewable energy sources and measures to boost energy efficiency.

A senior economics professor at the University of Massachusetts, Pollin is a prominent critic of the austerity policies imposed in Europe in the recent years of economic and financial crisis.

He said Spain should spend $21 billion (€18.4 billion) – about 1.5 percent of its gross domestic product – over 20 years through public and private investment and “dramatically” increase fossil fuel prices.

He said that way Spain would save more money by reducing its reliance on energy imports than it would have to spend on efficiency and renewables.

“This entire programme can be self-financed, if you think about the reduction in oil-import dependency,” he said.

Founded just a year and a half ago, Podemos has surged in popularity, campaigning against corruption and economic hardship in the crisis sparked by the collapse of a building boom in 2008.

Pollin said many of Spain's lost construction jobs could be recovered through investments in adapting buildings to a greener economy and Spain could become “a world leader” in reducing emissions.

Prime Minister Mariano Rajoy insists his austerity policies are to thank for Spain returning to growth and warns that a change of course now would undermine the recovery.