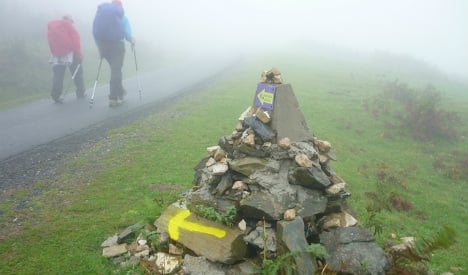 The 50-year-old man from Wales, made a call to emergency services at around 9pm on Monday evening explaining that he was lost somewhere between Valcarlos and Roncesvalles in the region of Navarra.

As a result emergency services scrambled a helicopter and sent out teams from the police, mountain rescue and fire services to try and find him.

“He explained that he was in the mountains, that he was weak, disorientated and exhausted but then the line cut,” a spokesman from Navarra emergency services told The Local. “We believe he is about 50 years old and is from Wales.”

Rescue services were sent to the area to locate him but were unable to and the search was called off at around 3am.

“The search was resumed around 8am on Tuesday with various teams from Civil Guard, mountain rescue and fire service out looking for him,” said the government spokesman adding that a helicopter had also been scrambled.

“We have checked with the local hotels and nearby pilgrim shelters but there is no sign of him yet,” the spokesman said.

It is understood that the man was walking on his own and had just started his pilgrimage to Santiago de Compostela.

“Roncevalles is usually the stop at the end of the first day,” said the spokesman. “It is a path through the Pyrenees but the weather isn’t bad at the moment and it’s not too cold.”

It is not unusual for authorities to receive emergency calls from lost pilgrims, the spokesman explained. “It does happen from time to time and the hope is that he found his way to a road and hitched a lift somewhere. Sometimes we are searching for a missing person and they turn up in a hotel in Pamplona,” he added.

Infact, this is exactly what happened. Almost 24 hours after the search and rescue operation was launched he turned up at the pilgrim's hostel in Roncevalles.

“He found his own way there on foot,” said a spokesman from the emergency services of Navarra. “He walked in to the alberge in Roncesvalles and said he had been lost and had called for help. He said he was very tired but wasn't in need of medical attention.”

A spokesman from the British Embassy in Madrid tod The Local: “We can confirm that the British national reported missing in the Navarra region was last night located safe and well.”

Police are still investigating the disappearance of an American woman, Denise Pikka Thiem, who went missing further along the route near Astorga in the Leon province.

The 40-year-old from Arizona has not been since April 5th.

Last year more than 240,000 people traveled the camino to reach the shrine of St James – a pilgrimage that dates back to the ninth century – the majority on foot but others choose to do it by bicycle, or on horseback.