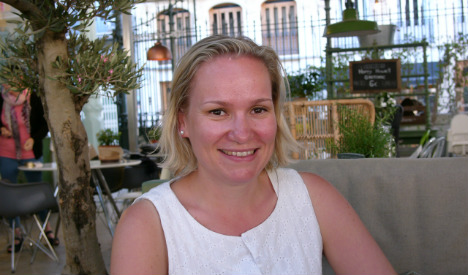 A world traveller since the age of 18, Stephanie worked for the Walt Disney Company for more than 13 years before deciding to settle in Spain's third largest city, Valencia.

What made you decide to come to Spain?

I’ve been working as a tour guide since 2008 with a company called Adventures by Disney. I enjoyed travelling around the world but recently I felt the need to settle somewhere. I love my country, Germany, but I’m not interested in living there. I lived in Florida for some years and I got used to the sun, so I thought maybe Spain could be an option. I ruled out Madrid because there’s no beach and Barcelona because of the Catalonia independence conflict. I had visited Valencia and thought it could be the perfect place for me. I really loved the city and then I was lucky enough to get the license to be an official guide. So now I’ve been here for four years.

Tell us a bit about your story before coming to Spain.

I was born in East Germany, in a small village an hour from Hamburg, a very humble place. I couldn’t afford Erasmus but I took a year off from university and started working for the Walt Disney Company in Paris. I worked as a waitress in a western show. In Paris I fell in love so I finished my studies in Sorbonne University. I also worked as a German teacher at the French Lycée but I was only 24 and didn’t want to keep on teaching.

In 2007 I got a job at Disneyworld Florida. I loved my life there, travelling across the US, but I got tired of the job. Then I heard about a project called Adventure by Disney, and out of 1,400 applicants I was the one that got the job. I like being with people and using different languages; French, German, English and Spanish. I’m learning to speak Italian. I love working with families and telling stories.

Tell us about your work schedule?

April and May are good for tourism in Valencia, it is peak season so I work almost everyday. I never work in January, because there are not a lot of tourists. January is my holiday month. February and March I usually spend on different projects. For example, I did a job with Mercedes Benz, even though I know nothing about cars. Some 16,000 people came to the event and my job was taking groups sightseeing in their free time after the meeting. During the summer months I usually travel abroad to do some tours in Europe for the Disney company and in September I start again with tours in Valencia.

How is your working life in Valencia?

I’m freelance but I work with an agency in Hamburg. I love being in Valencia, when I'm at home I love sewing and cooking, but I also like travelling for my job. I have travelled a lot but now I’ve decided to make Valencia my base. I can’t rule out nice job offers in the future, though.

What do you dislike about Valencia?

The most evident flaw about Valencia is the airport. It's not always easy to find good flight connections from here. But I'm in love with this city, it is not an expensive place and although I have been here for four years already I’m not planning to move.

Do Germans live up to the stereotype of being as serious as Spanish people think?

Not at all. I would define German people with a sentence: work hard, play hard. We know how to party, you only need to go to Mallorca to see that, but we do our job too. There’s a German word to describe our philosophy, Feierabendbier. It refers to the beer time after a long day of work and it pretty accurately encapsulates German mentality.