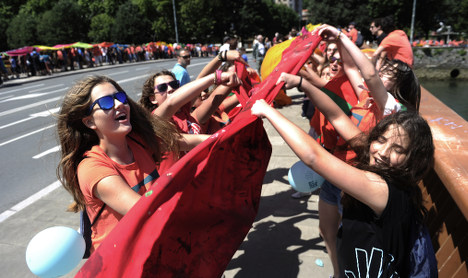 People holding a long multi-coloured cloths as they march through the streets of San Sebastian on Sunday. Photo: Ander Gillenea AFP

Demonstrators held long multi-coloured cloths as they marched through the Basque capital Vitoria, commercial hub Bilbao and the seaside resort of San Sebastian, as well through Pamplona in the neighbouring Navarra region, which has a huge Basque-speaking population.

Many protesters were draped in red, white and green Basque flags.

The demonstration was organised by pro-independence platform Gure Esku Dago (It's in Our Hands), and was backed by separatist parties as well as dozens of local sports and arts personalities.

The group in June 2014 organised a 123-kilometre (76-mile) human chain across the Basque Country, stretching from Durango in the north to Pamplona.

In Bilbao, the demonstration snaked along the Nervion river and past the city's iconic glass and titanium-covered Guggenheim Museum, while in Pamplona the human chain linked the city's five main squares.

The Basque Country, which has its own distinct language and culture, has traditionally sought greater self-rule from Spain.

A peaceful Basque independence movement has gathered pace in recent months, partly inspired by large pro-independence demonstrations in Catalonia, which in November 2014 held a symbolic vote on independence in the face of opposition from Spain's central government.

The armed Basque separatist group ETA, which has been weakened by a string of arrests and dwindling popular support for its violent tactics, announced an end to violence in October 2011.

ETA is accused of killing 829 people in a four-decade campaign for the independence of the Basque region that straddles the French and Spanish border.