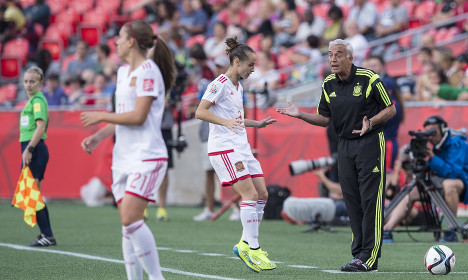 Quereda speaks to his players during the recent defeat to South Korea at the Women's World Cup. Photo: Nicholas Kamm / AFP

Spain finished bottom of Group E following a 1-1 draw with Costa Rica after losing to Brazil 1-0 and South Korea 2-1.

“It's obvious that World Cup preparations weren't correct, inexistent friendlies, poor acclimatisation, analysis of rivals and how to prepare for matches insufficient and this has long been the case. We believe that it’s time to turn the page and changes are needed,” the 23 players said in a statement.

Captain Veronica Boquete had earlier slammed the coach on Spanish radio. “We didn't achieve more because we didn't have the support we needed and the preparation required,” said the 28-year-old striker.

Spain arrived in Canada four days before their first game without playing a match in more than two months.

“Since the end of the game (against Korea) we have not had any conversation or any contact with the president of the Federation, nor the coach, nor the head of the expedition,” she said.

“We have been representing our country at the highest level and there are things that have not been done well and I think it's time to reflect, to think, and see where we go and how,” added Boquete, who won the Champions League title with Frankfurt a few months ago and recently joined Bayern Munich. 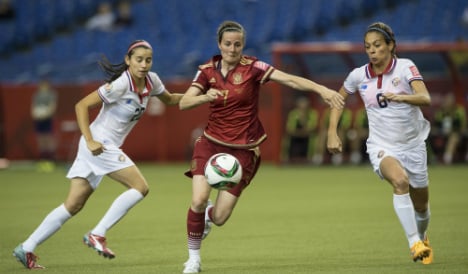 Losada, 24, picked up a cross from Sonia Bermudez into the penalty area, controlling well before firing past Dinnia Diaz in the Costa Rican goal.

Spanish celebrations were short-lived though when Rodriguez Cedeno picked up an Irene Paredes cross in the penalty area to slot in.

Spain, ranked 14th, missed a string of chances in the second half, but their 37th-ranked opponents stood firm, and next face South Korea on Saturday.

Spain's second group game will be against Marta's Brazil with their final group game against South Korea next Wednesday.