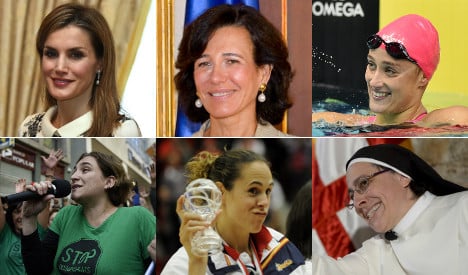 The fourth annual list, released on Wednesday by online platform Mujeres y Cia, whittled down 500 candidates to find the 100 most talented women in various fields with the aim of “promoting debate about and reflection on the role of women in our society”, Mujeres y Cia said in a statement.

“Again we are expanding the base of notable women and making visible their talents so that they may become benchmarks for others,” said Mercedes Wullich, founder and director of Mujeres y Cia, in the statement.

A panel of 50 judges from backgrounds in various fields decided on the final list. Those selected will also be invited to events throughout the year, such as breakfasts centered around different topics and networking meetups.

The list is broken down into various categories, including culture, politics, sports, business and media.

Among those within the sports category are swimmer Mireia Belmonte – who holds five world records – and basketball player Amaya Valdemoro.

The Local previously compiled our own list of Spain’s top women, and it seems we came pretty close.

Read here: The Local’s picks for Spain’s most powerful women.