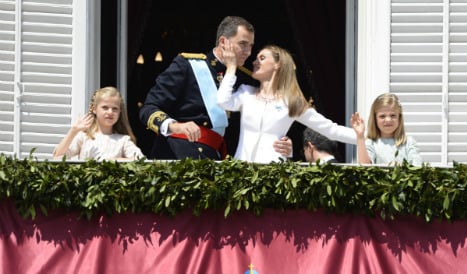 On June 19th 2014, a Spanish prince became king as Prince Felipe took over from his father, Juan Carlos, who had announced his abdication on June 2nd.

In pics: King Felipe's first year on the throne

Spaniards welcomed the new king, hoping he and his young family could bring a modern, more likeable face to the scandal-hit royal family and during his first year, he seems to have succeeded.

According to a poll published on the first anniversary of his coronation in Spanish daily El País, 81 percent of Spaniards support the way in which King Felipe is carrying out his duties, what could be seen as a resounding approval of Felipe's first year as king and a significant increase in support for the royal family.

But while Felipe has been praised for slashing his own salary by a fifth, as well as speaking out against Spain's brain drain his first year as king has not been completely plain sailing.

He has also been plagued by the scandals affecting other members of the royal family, including his sister's trial for tax fraud and the paternity claim against his father, King Juan Carlos.

Let us know how you think King Felipe has navigated his first 12 months as monarch in the comments and on our Facebook page. In pics: King Felipe's first year on the throne