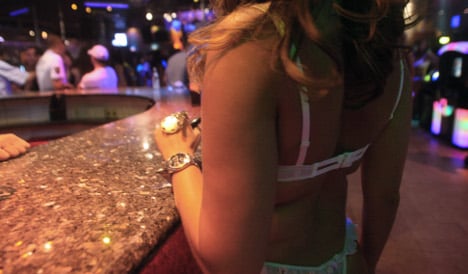 Colau was sworn in as mayor of Spain’s second-largest city last week after her activism with protest group Indignados (Outraged) won her the most votes in the municipal election in May.

On Thursday, she said that fining sex workers for offering services on the street only worsens their already precarious situations. Colau said that prostitutes are often coerced by organized gangs and that such sanctions are disproportionate, according to newspaper La Informacion.

“We have to work to address the problem in a structural way, focusing our efforts on issues of organized crime, such as the fight against sexual slavery,” Colau told reporters at a press conference.

Prostitution was decriminalized in Spain in 1995 while exploitation, such as pimping, is illegal.

The Catalan regional government passed laws in 2012 to fine prostitutes working in the street, as well as their customers, but the Barcelona City Hall Ombudswoman, Maria Assumpció Vilà, has said that the policy does not work.

Colau also expressed concern on Thursday about penalties against young people for playing in the street on skateboards and with balls. Fines for skateboarding outside designated areas can range between €750 and €1,500.

“We have to guarantee the coexistence, but some regulations criminalize the most vulnerable, rather than attack the causes,” she added, emphasizing care for prostitutes and the homeless population.

Colau, whose early activist work focused on anti-eviction efforts, also said she would work to improve access to affordable housing.