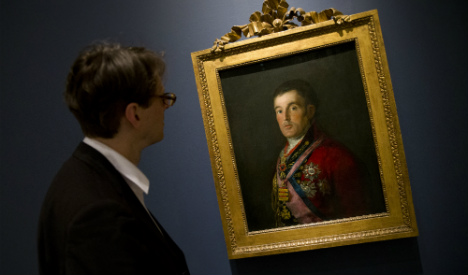 A portrait of the Duke of Wellington painted by Francisco Goya. Photo: Justin Tallis / AFP

To mark the 200th anniversary of the battle, Arthur Charles Valerian Wellesey, aka, the 9th Duke of Wellington gave an interview to Spain’s daily newspaper ABC in which he spoke of the family's historic links with Spain.

“If the first duke was alive today, I am sure he would be pro-European,” the current Duke told ABC. “He devoted most of his life to improving relations between the countries of western Europe.”

“Waterloo changed the military and political order of the continent and brought us to a long period of peace that only ended a hundred years later, with the outbreak of the First World War,” he explained.

Described by the newspaper as the “most Spanish of the British nobles” the 69-year-old Duke who also has the Spanish titles of  Duke of Ciudad Rodrigo and the Viscount of Talavera, explained that he “certainly feels a strong connection to Spain”. His second home is an enormous finca outside Granada called “La Torre”, an estate of around 1,000 hectares that was given to the first Duke in thanks for his role in ousting Napoleon’s armies in Spain during the Peninsula War.

“I have been visiting Spain several times a year for forty years,” he explained. “It’s impossible not to think of Spain as my second home.”

The estate still regularly plays host to members of Europe’s royal families, including the Prince of Wales and the Duchess of Cornwall, as well as Princes William and Harry.

Commemorations to mark the bicentenary of Battle of Waterloo were taking place on Thursday in London and outside Brussels.