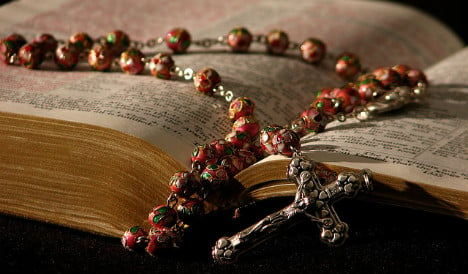 A councillor was booed for removing religious symbols from his swearing in ceremony. Photo: Roger Smith/Flickr

A new leftist councillor of a small town south of Madrid faced boos as he officially took office, after requesting that a bible and crucifix be removed from the podium at which he was about to make a speech.

Alberto López, of the United Left party, asked that religious symbols be removed from his official inauguration ceremony in the town of Argés, near Toledo, which provoked loud booing and shouting from the assembled audience.

The United Left party has blamed the conservative Popular Party for the unseemly reaction, criticizing the “shameful attitude of the PP and its acolytes, who showed an intolerable lack of respect for the diversity of Argés”.

“The presidential board agreed to the removing of religious symbols, causing a real tumult among the ranks of the PP, to the extent that they resorted to a degrading spectacle in which several attendees, shouting insults, preventing the new mayor from being sworn in,” the party wrote under the YouTube video of the incident, which has already notched up over 30,000 views since being uploaded on June 15th.

López had to repeat the swearing in twice, according to the United Left, because of the disruptive reaction of the audience to the removal of the bible.

The video has provoked angry comments on YouTube, with commenter Tomás Reyes writing, “How shameful, it seems that nothing has changed in this country”.

Another commenter, Gorka Barandiaran, wrote: “Isn't this a public meeting, THIS IS NOT A CHURCH”.

The United Left also emphasized that a significant number among the audience reacted positively to the gesture, applauding López for removing the religious symbols.

The left-wing party also pointed out that the Popular Party was feeling particularly disgruntled because of its recent loss of votes in Argés, which has been ruled by the same PP candidate since 1991.

It is a local example of the national trend in Spain’s recent regional and local elections, which saw the ruling Popular Party take a beating and the rise of several left-wing mayors, most prominently former indignada activist Ada Colau in Barcelona, and former Communist judge Manuela Carmena in Madrid.