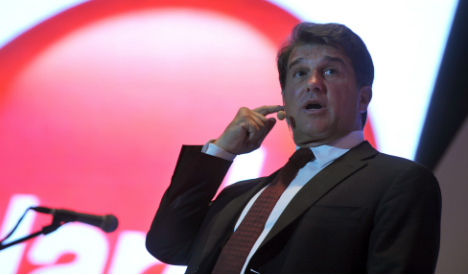 “I am running in the Barcelona club elections, so that Barcelona can once again belong to everyone,” he said in a video message posted online.

“I feel more prepared than ever to be president of the club. I have more experience. I have my faults as most of you know, but I stay true to the same principles.”

The election for a new president comes at a delicate time off the field for the club, who won a stunning treble of Spanish league, Copa del Rey and Champions League titles this season.

Its current president Josep Bartomeu has been called to stand trial over alleged tax fraud linked to the signing of star striker Neymar in 2013.

Bartomeu is nevertheless expected to run again for the post, along with four other candidates. No date has yet been set for his trial, in which the club itself is also summoned as a defendant.

Bartomeu has a strong sporting record having presided over the treble and is credited with improving the club's finances.

He has been in charge since last year after the resignation of Sandro Rosell, who is also a defendant in the fraud case.

Laporta, seen as a more charismatic figure, was president for seven successful years on the field for the Catalans from 2003 to 2010, but he left the club heavily indebted.

Laporta is a close ally of influential figures such as the club's beloved former coach Pep Guardiola and its former captain Carles Puyol.

Bartomeu was a member of the board that sold to Qatar the sponsorship rights to Barça's kit. Previously, Laporta had earned respect for dedicating the space on the shirts to UNICEF.