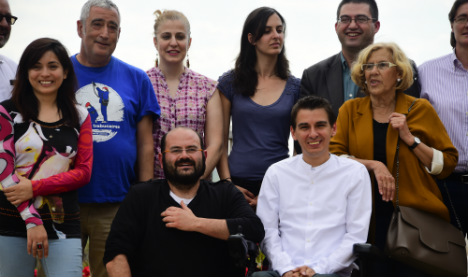 Rita Maestre, 27, became embroiled in the controversy just four days after taking up her post as a council spokeswoman for the Ahora Madrid group, which was born out of the “indignado” (outraged) protest movement.

The Socialist Party, which shares power with Ahora Madrid in the city, called for Maestre to resign over the protest in a university chapel in 2011, in order to protect the council's credibility.

“If you are facing charges you have to step back and stand aside until the verdict,” said the Socialists' spokesman Antonio Miguel Carmona.

Maestre told La Sexta television that the church protest was “a peaceful demonstration” about “secularism and women's rights.”

Spanish media said protesters burst into the chapel in Madrid's Complutense University and that some took their tops off and yelled anti-Vatican and women's rights slogans, including “Get your rosaries out of our ovaries.”

A spokesman for Ahora Madrid confirmed that a court was examining a case against Maestre and that prosecutors had called for her to be given a one-year jail sentence.

Defending herself in a tweet, Maestre wrote: “Four years ago I took part in a peaceful protest for secularism. Get used to it: Those coming to power are people who have a history (of activism).

“This in no way disqualifies Rita for the job,” the Ahora Madrid spokesman told AFP. “There are many activists among our candidates and we do not think it is something punishable.”

On Monday, the group's cultural affairs commissioner Guillermo Zapata resigned from his post after it emerged he had repeated jokes about the Holocaust on Twitter in 2011.

Zapata said his jokes had been prompted by a debate on the limits of humour and were taken out of context.