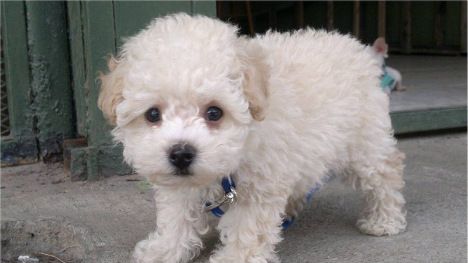 Buddy has now been transferred to a kennel. Photo: Irene Sola

The pup had been kept in a sealed crate over the weekend after authorities insisted he be sent back to New York or be put down because it wasn’t possible to detect his microchip.

Authorities issued the reprieve after a huge social media campaign that saw 86,745 people sign a petition on Change.org in just three days.

To the huge relief of his owner Irene Sola, Buddy was transferred to a kennel for 21 days of quarantine on Monday.

The victory came after lawyers from animal welfare party Pacma took on the case.

“Buddy had arrived at El Prat on Friday morning with all his paperwork in order but the readers they had available couldn’t detect his microchip,” Irene Gonzalvo, the lawyer in Barcelona, told The Local.

“We took on the case because the airport controls wanted to shut the dog in its crate in the warehouse, like an unclaimed suitcase, without water or food and this after the long trip from the USA.

Buddy arrived from New York to start a new life with his owner in Spain Photo: Mercedes Lopez

“Buddy’s owner Irene was in despair not knowing what to do, she just wanted to be with her dog who was alone in a cold deserted warehouse,” the lawyer continued.

A team of lawyers pressurized authorities citing European Union regulations over the care for live animals at airports and demanded that the four-month-old dog be handed into the care of a trusted veterinarian.

“Finally and thanks to the large support through social networks the administration agreed to quarantine the animal,” said Gonzalvo.

But Pacma warned that lessons must be learned from the case of Buddy.

“Never again can an animal be kept  in similar circumstances or sacrificed because of the incompetence of the authorities,” insisted Gonzalvo. “The Buddy case has taught us a lesson on the power of people who stand up to the mistreatment of animals.”