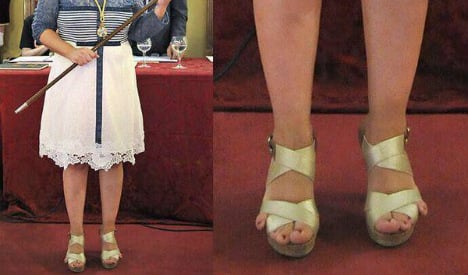 The new mayor of Jerez has become an internet sensation thanks to her unusual toes. Photo: @berlich/Twitter

Since Spain’s local and regional elections on May 24th, towns and cities have been buzzing with political pact making, but one mayor has made headlines for all the wrong reasons thanks to her unusual toes.

The newly elected Socialist mayor of Jerez de La Frontera in Andalusia, Mamen Sánchez, was photographed at her inauguration on Saturday wearing a pair of sandals, but soon went viral on social media thanks to her little toes, which were sticking out of the shoes at an extremely uncomfortable-looking angle.

The photograph immediately started doing the rounds on social media, with Spaniards pondering if the new mayor had six toes, or whether her little digits had merely escaped her ill-advised footwear at a rather inopportune moment.

Sánchez has been praised for taking her newfound fame with good humour. She tweeted:

“I haven’t laughed so much in a long time at all the comments, memes and news stories about my shoes and little toe.”

The tweet was accompanied by a photograph, sent to the new mayor, of “team Mamen” depicting a group of women all sporting the pinky-outside-shoe look.

Sánchez can take comfort in the fact that she is in good company when it comes to viral tootsies; Hollywood actress Julianne Moore went viral in 2013 when she walked the Cannes red carpet with her little toes sticking out of her sandals.

Various social media users posted photographs of their own escaped little toes with the hashtag International Sticky Out Toe Day, leading others to ask if this could see the birth of a new fashion.

Spanish actress Macarena Gómez tweeted that the mayor had “started a trend”.