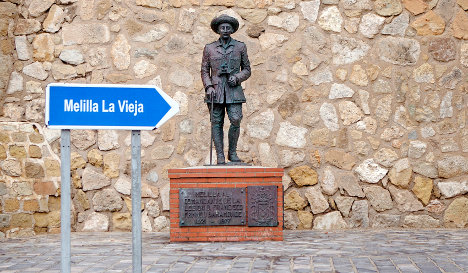 The image uncomfortably raised the spectre of the dictatorship and the allegiance of a paramilitary force that has at times struggled to shake off its reputation as the personal army of the fascist who ruled Spain with an iron fist until his death 1975.

The photo shows nearly two dozen officers standing in front of the Franco statue located in the Spanish north African enclave of Melilla, holding up the Spanish flag.

One Spanish lawmaker called for the immediate dismissal of each and every Civil Guard in the photograph.

“It is unbelievable to see something like that in XXI Century in the European Union,”  MP Jon Iñarritu of the Basque pro-independence party Amaiur,  told The Local.

“First at all, according to the law, symbols such as Franco dictator statues have to be removed from public spaces,” he said.

“Secondly, if we take into account that public servants must respect democratic values, then those officers in the photo should be automatically expelled.”

The statue in Melilla is the only one commemorating Gen. Franco in a public square in Spain. Although many cities had such statues erected during the dictatorship, all except for the one in Melilla have been removed in the years since his death.

Dozens of other symbols left over from the dictator's reign, however, are still scattered across Spain 40 years later after his death, despite a law that calls for their removal.

The image of the officers with the statue prompted criticism across social media, with some asking whether officials would “punish these idiots” and others saying the photo “worried” them.

The officers form part of a unit that patrols the enclave’s African border, a frontier that has experienced an influx immigrants trying to cross into Spanish territory.

Sources told the broadcaster that the image was snapped by an officer who then posted it on Facebook before taking it down after seeing people's reactions.

Other sources from the Interior Ministry told the broadcaster that they are investigating the authenticity of the photo.

During his subsequent 36-year dictatorship, Franco quashed any perceived opponents and even suppressed all other languages besides Castilian Spanish, such as Catalan, Basque and Galician. Only after his death in 1975 was Spain able to take its first tentative steps towards democracy.

In 1982, the fledgling democracy was almost derailed with an attempted coup when around 150 Civil Guard officers stormed the Spanish Parliament, fired shots and took lawmakers hostage in a bid to install a military regime, handing the monarch absolute power.

Led by Liutenant Colonel Antonio Tejero Molina of the Civil Guard, the crisis was averted by King Juan Carlos, who gave a televised speech ordering the plotters back to barracks and pledging his support for the democracy, an act that earned him respect from even the hardiest Republicans.
One Spanish lawmaker called for the immediate dismissal of the officers in the photograph and said it was
a reminder of the spirit behind the failed coup.

“What are they celebrating? 23-F?  (February 23rd was the date of the failed coup in 1981),” tweeted Iñarritu who tabled a question about the photograph in parliament on Friday.

The Civil Guard have been criticized for their heavy-handed treatment of migrants at the border. In February, a judge ordered 15 Civil Guards to appear in court over the drownings of 15 migrants in Ceuta, also in north Africa.

Another 24 officers are facing criminal charges for their treatment of migrants in both the enclaves of Ceuta and Melilla.

Franco remains a controversial figure in Spain, with some still honouring his death each year.