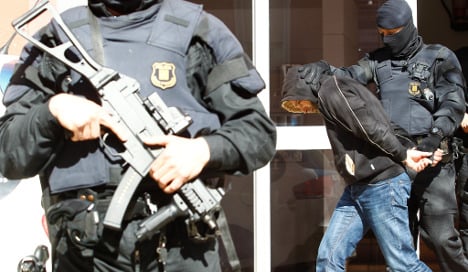 A man suspected of links to Islamic State groups is arrested during an antijihadist police operation in Sabadell, Catalonia on April 8th. Photo: Quique Garcia / AFP.

Soeren Kern of the American Gatestone Institute think-tank explained the growing concerns about radical jihadists in the country in an essay published on Saturday June 6th.

Kern referenced an Interior Ministry report last month that revealed authorities have arrested 568 jihadists over the past ten years in 124 different operations, but emphasized that the same report also estimated the probability of an attack in Spain to be 70 percent.

Spanish authorities have been increasingly cracking down on suspected terrorists in recent months amid growing concerns about Isis and lingering fears following the Paris attacks at magazine Charlie Hebdo.

The analyst, now based in Madrid with the Strategic Studies Group, wrote that Spain has become more of a hotbed of extremism as radicals have entered Spain from France where the French government has stepped up its own security measures since the attacks.

Kern said that the more than 50,000 Muslim converts living in Spain are at particular risk of being manipulated by Islamists because their legal Christian names attract less attention and because they may feel pressured to prove their faith.

“The Islamists are especially interested in converts who have not yet taken on Muslim names and whose official IDs still have their Christian names, so they can purchase weapons without drawing the attention of police,” Kern wrote.

While higher numbers of German, French and the British citizens have left Europe to join extremist groups than Spaniards, Kern pointed out that Spain has seen an increase in recent months.

The Interior Ministry reported in January that there were 70 Spanish jihadists at the time who had gone to fight in conflict zones, but that number had increased by 45 people to 115 by an April ministry report, Kern noted.

Kern explained that Spain's history also makes it more attractive as a target by extremists.

“Many Muslims believe that territories Muslims lost during the Christian Reconquista of Spain still belong to the realm of Islam. They claim that Islamic law gives them the right to return there and re-establish Muslim rule,” he wrote, also citing a 2014 Islamic State video which vowed to liberate Andalusia from non-Muslims.

In July 2014, jihadists with the Islamic State produced a video in which they vowed to liberate al-Andalus from non-Muslims and make it part of their new Islamic Caliphate.

Jihadists trying to return to Europe is also cause for concern in Spain, Kern wrote.

“Spain has also become a key entry point for human trafficking mafias being used by jihadist veterans seeking to return to Europe after fighting in the Middle East,” the foreign policy analyst said.

Officials have reported that of the 14 jihadists who have returned to Spain, nine are in prison, but five are free.