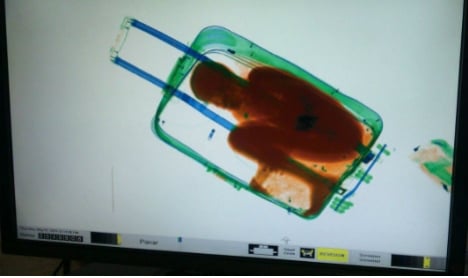 Adou was discovered during a luggage scan at the Tarajal border crossing. Photo: Spain's Interior Ministry

Tears and smiles were captured on camera at the reunion of eight-year-old Adou and his mother Lucie Ouattara on Monday in Spain's north African territory of Ceuta.

It was an emotional meeting after Adou from the Ivory Coast was discovered last month by authorities curled up inside a suitcase at the border crossing in Ceuta, in an attempt to join his parents in Spain.

His father Ali Ouattara had tried to arrange through an intermediary for his son to reunite with the rest of the family, who are in Spain legally, but later admitted that he had no idea it would mean Adou ending up inside of a suitcase.

The story of the “suitcase boy” has stirred controversy and highlighted the plight of some migrants willing to go to extreme lengths in order to make it to Europe.

But it could still take some time before the family is fully whole again. Ali has been in on remand in prison since Adou was discovered, facing criminal charges for the smuggling attempt, for which he paid traffickers €5,000. He believed it would buy his son documentation and a way into Spain.

Just two hours before meeting their son, Lucie paid her husband's bail of €5,000 so that the family could be together, newspaper El Pais reported.

After receiving the bail money, a court has ordered the release of the the father from his prison in Algeciras, though he must still appear before court once a month and is barred from leaving the country, according to newspaper ABC.

El Pais wrote that Adou and Lucie will be on their way by ferry to cross the Strait of Gibraltar to the mainland to see his father.

Ali Ouattara told a court previously that he had repeatedly tried to bring his son into the country through legal means to join his wife and eldest daughter in the Canary Island of Fuertaventura, but had failed because his monthly salary was just €41 short, according to a report in El Pais.

He said the law requires an income of €1,331 a month and that he only earns a monthly salary of €1,290 working at a launderette.

Adou had been cared for at a juvenile centre in Ceuta. His mother was allowed to pick him up there after a court granted permission and conducted a DNA test to prove their relation.