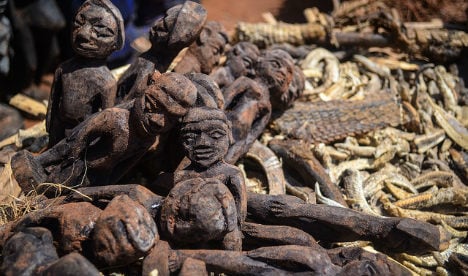 Officers rescued four victims and arrested six members of the organization that used juju voodoo rituals to sexually exploit women, according to a police report.

Traffickers reportedly promised the women from Nigerian jobs in Spain, only to force them into prostitution once they brought them to places such as Lanzarote in the Canary Islands and Palma de Mallorca in the Balearics.

The traffickers had put the women through a juju voodoo ritual that used the victims' finger nails or public hair and involved animal sacrifice in front of idols in a temple in order to “guarantee that the women complied with everything they demanded, under threat of death to them and their families”.

Juju is a practice originating in West Africa, often characterized by amulets and spells. It has commonly been used to drive Nigerian women into sex trafficking in places like Italy and the United Kingdom by exploiting the women's fears of the powerful 'magic'.

The women in Spain were also coerced into assuming a debt of up to €50,000, pledging subservience to the group's madam and the pimps.

“Through this ritual, they had to accept full subordination and obedience to the madam and her collaborators until they had completely repaid the imposed debt,” police said in a statement.

The traffickers sought out underage girls to obtain the “maximum profitability”, according to police. They also looked for women with precarious financial and family situations, who would be more likely to be deceived by an offer of work in Europe.

Police began the investigation into the network in February after finding a woman of sub-Saharan origin who appeared to be a victim of trafficking who then confirmed their suspicions.

All traffickers from the group who were in Spain have been arrested and charged with human trafficking for sexual exploitation, membership in a criminal organization, forced prostitution or pimping and crimes against the rights of foreigners.