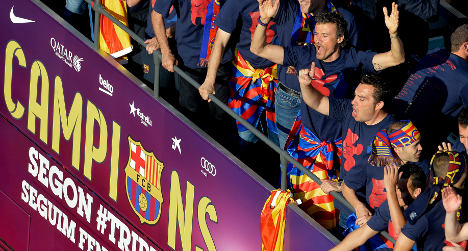 After a week of football news dominated by corruption at Fifa and the resignation of Fifa president Sepp Blatter, the world's attention turned back towards the round ball game itself for several hours on Saturday.

“A legendary Barça achieves a new treble in Berlin,” the online edition of Catalan daily La Vanguardia said in its headline describing the team's steamrolling victory.

“A treble, the second in the 118 years of the club, closes a dream season,” it added. The newspaper compared Barcelona's domination to a “hegemony”.

The 3-1 Champions League final victory in Berlin made Luis Enrique's side the first team to twice win the European treble — the European and Spanish domestic titles and the Spanish Cup.

The club clinched its first treble in the 2008/09 under former coach Pep Guardiola.

“A fifth with a treble,” headlined sports daily Marca in its online edition.

“Kings of Europe again. Another triple again. Barcelona won its fifth European Cup in Berlin and closed a perfect season, just like six years ago,” it added.

“Barça already has its fifth,” wrote rival sports daily AS while Catalan sports daily Mundo Deportivo said Barcelona had “returned to the summit of world football”.

“Barcelona's fifth heaven,” daily El Mundo said in its headline above a photo of jubilant Barcelona players celebrating their triumph at the Olympic Stadium in Berlin.

“Barcelona got out of the purgatory in which Juventus tried to take it and reigns over the European scepter and the triple crown,” it added

“But the European Cup will travel from Berlin to Catalonia.”