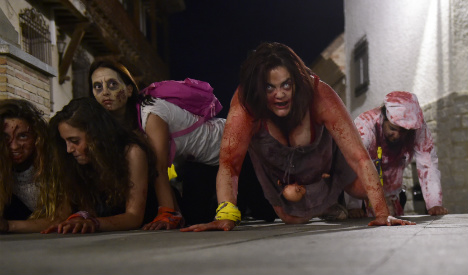 Zombies have taken over the Spanish village of Olias. Photo: AFP

As night falls in a small Spanish village, horror movie fan Noelia Vacias prepares for a night as a zombie invasion survivor, her eyes glowing white from tinted contact lenses, her arms covered in fake blood.

Nearby Enrique Morales wears a helmet and dark glasses and carries a fake gun.

Like the hundreds of others waiting in the park, for the next eight hours they will flee the living dead with blood dripping from their wounds to avoid being contaminated and turning into zombies themselves.

“A zombie does not have the power of other characters” in science fiction, says Vacias, a 35-year-old logistics expert. “Before being zombies there were normal people. But they never get tired and that is what is frightening.”

For Morales, a 23-year-old telecoms engineer, meanwhile, the game is “a way to take part in reproducing a zombie apocalypse”.

The scenario, which resembles a scene from the TV series “The Walking Dead”, involves over 400 participants.

“Survival Zombie” – held recently in the village of Olias del Rey, 70 kilometres (40 miles) south of Madrid – was the 22nd edition of the event in Spain since it was launched in 2012, with more and more people turning out in each town that hosts a zombie invasion.

A group of actors dressed as soldiers are also involved in the game, helping some players against the zombies or making it harder for others to solve the clues to survive.

Some of the largest zombie games in Spain have drawn up to 3,000 participants and even involved tanks or helicopters.

Most participants are men aged 17-40, even if the game is open to anyone over the age of 10.

Pablo Lueiro, 33, and his friend Juan Carlos Fernandez, 44, are hooked on the adrenaline provided by the all night roleplaying game and have taken part in several editions.

“When you play, you are almost convinced that you are fighting to survive,” said Lueiro, who works as a video game tester, adding that he felt fear even if it was only “psychological”.

His friend, who carried a flashlight and a walkie talkie, said the game revived memories of playing catch as a child.

“We walked nearly 50 kilometres during another zombie night,” he said.

Zombies have been in fashion since the beginning of the 2000s in the movies, literature and video games, according to Jerome-Olivier Allard, who has a doctorate in film studies from the University of Montreal in Canada and is a fan of the genre.

The games allow people to tap into their “survival fantasies”, he said.

In addition to Spain, Zombie-themed events have proved popular in other countries as well.

In the United States and Canada zombie marches started being held in the early 2000s, drawing several thousand people in some cities, before the fashion spread to other continents.

In Britain, a zombie chase game called “2.8 Hours Later”, inspired by Danny Boyle's 2002 cult film “28 Days Later” about a pan-global epidemic that turns people into cannibalistic zombies has been held in several cities.

In Canada, a summer camp for adults provides lessons on how to survive “an attack by the living dead”.

Diego de la Concepcion, the organiser of the “Survival Zombie” roleplaying games in Spain, said other creatures did not spark as much interest.

“We tried with other themes, with aliens and predators, but they did not have as much success,” he said.

The goal of the game is for participants to stay alive until morning by avoiding getting touched by a zombie.

The contestants need to find clues that will help them reach a safe haven, the end point of the contest.

They are not allowed to attack the zombies so their only means of survival is by avoiding the living dead.

For French sociologist Maxime Coulombe, author of the book “The Small Zombie Philosophy”, the appeal of the games is simple.

People are fascinated by zombies, he says, and “contemporary societies are obsessed with the end of the world”.