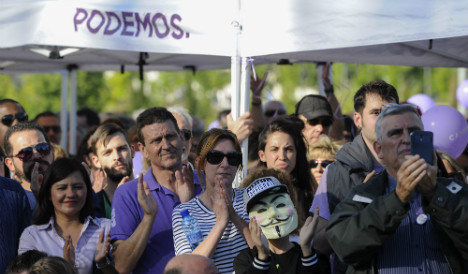 The Pew Research study asked Europeans about their attitudes to a range of issues, including the European Union, politics and the economy.

The six-nation study revealed that Spaniards have overwhelmingly welcomed the meteoric rise of left-wing protest party, Podemos, which grew from humble beginnings just over a year ago to clinch third place in the recent local and regional elections. Out of the six European countries surveyed (Spain, France, Germany, Italy, Poland and the United Kingdom), Spaniards were by far the most positive about the rise of a nontraditional party.

In Germany the vote was split, only half of people think the rise of Eurosceptic right-wing Alternative for Germany was a good thing.

The French and Polish are much less inclined to support their country’s nontraditional parties, which are arguably much more extreme than the examples given in the other European countries.

Out of the six nontraditional parties cited in the study, Podemos is the only left-wing political force, suggesting Spaniards’ concerns are different to the anti-Europe and anti-immigration rhetoric often favoured by the non-traditional parties in other European countries. Ada Colau of the Barcelona en Comú party won the most votes in the Catalan capital. Photo: AFP

Ada Colau  will be the first female mayor of Barcelona. The left-wing activist, who ran in a coalition supported by Podemos, was heavily involved in the indignados movement. Photographs of her being led away from a protest over evictions by police were widely circulated in both the domestic and international press after her win.

Madrid's new mayor could also be a Podemos member; retired judge and former communist activist Manuela Carmena could take the helm of the Spanish capital if the ongoing negotiations fall in her favour.

Podemos, led by the pony-tailed former Political Science professor, Pablo Iglesias, is hoping to build on its success in the run-up to November’s general election, and with 70 percent of Spaniards applauding its rise, the party is already shaking up traditional politics in Spain.