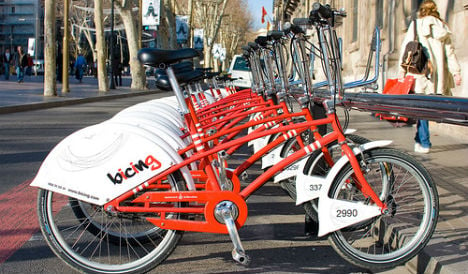 Barcelona's bike sharing programme is one of best in the world. Photo: Bike and Love Barcelona

The Copenhagenize index praised Spain's second-largest city for its “firm, consistent commitment” to make its “citizens choose a bicycle for transport”.

The report said the Catalan capital was “in a league of its own” when it came to other cities in the region.

The 7 reasons why Barcelona is best for bikes

“There is no El Clásico on the bicycle urbanism pitch, with Madrid so painfully far behind. Among the larger cities in the region and, indeed, around the Mediterranean, Barcelona maintains a leadership role. Light years ahead of Rome and other large Italian cities,” read the report.

The annual index, by influential urban consulting firm Copenhagenize, pointed to city authorities employing “a mixture of traffic calming measures and infrastructure” to become a city where bicycles have “gained a foothold”

“The city's bike share programme is one of the best on the planet (measured by usage rates) and it has helped boost cycling levels across the board,” the report said.

Seville was the only other Spanish city to make it into the top 20 and was ranked just ahead of Barcelona at number 10.

Europe dominated the rankings although Buenos Aires, Argentina and the US city of Minneapolis, Minnesota made their debuts in the index.

The top 20 cities in the 2015 Copenhagenize Index were:

For more on the index, click on the image below