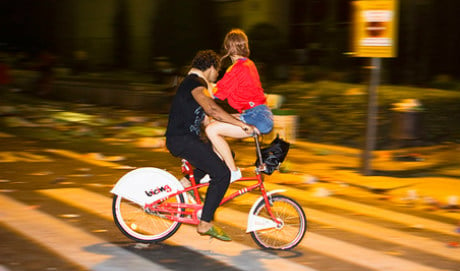 Barcelona is a romantic place to cycle around. Photo: Bike and Love Barcelona

Officially recognised as the most bicycle friendly city on the Mediterranean, Barcelona really is best seen from behind handlebars. And here are just some of the reasons why:

1. Visit different Barcelonas in one day

Take your time to explore different parts of the city, each with its own distinct character and easily reached by pedal.  From the brooding Barrio Gótico, to the beachside Barceloneta, taking in some fine examples of Gaudi’s modernism along the way. Cycling is a great way to enjoy the city and burn some calories at the same time. Whether you chose to make the climb up to Montjuic mountain or cycle out to the 1992 Olympic games venues at the Forum park, you will build up an appetite to be sated in Barcelona’s plethora of great eateries.

Barcelona can get clogged up with traffic jams. But if you are happy to take to two wheels you can enjoy the above ground experience, the leafy boulevards and some of Spain’s most interesting architecture using the cities 180km of cycle lanes Some places in the city are just too far away to walk and too expensive to go by taxi. Take Tibidabo, for example  which requires a catching a train, a tram and then a funicular to reach the top. But if you have the stamina, a cycle ride to the peak will be rewarded with impressive views and of course the thrilling downhill ride on the return return.

5. Visit out of the way places. Touring round the city by bicycle will mean you can easily access those lesser known Barcelona gems such as the Parc del Laberint d'Horta, an out of the way historical garden complete with maze.

If it’s your first time to Barcelona it is always a good idea to take a guided tour. But choose a tourist bus tour and you might spend much of day waiting in line at bus stop (to say nothing of spending €30 on a hop on/ hop off ticket). Bike and Love Barcelona offer bike rental and personalized guided tours for as little as €20 a day. The municpal shared bike scheme in Barcelona is cheap and easy. Photo: Bike and Love Barcelona

More than 2 million people in Barcelona use bicycles and the city operate a highly  successful bike share programme called bicing.  Some 6,000 bikes available at 420 'stations’ you need to sign up for membership but thereafter its free for the first 30 mins and only €0.70 for the next two hours.