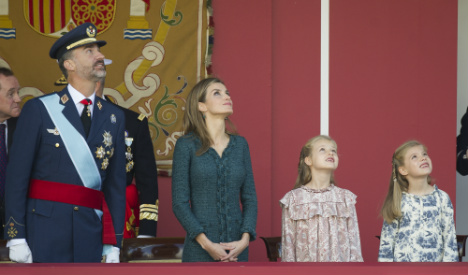 Slashing his own salary by a fifth – HIT King Felipe and Queen Letizia pictured during a visit to France. Photo: AFP

In his first royal budget as king, Felipe announced that he would earn 20 percent less than his father had as King, earning praise for a concrete step in trying to redeem the royal family’s image, especially during a time of severe belt-tightening for the majority of Spaniards. It has been one headache after another when it comes to the ongoing fraud case involving King Felipe’s sister, the Infanta Cristina. In December 2014 it was announced that she would be tried in court for tax fraud, a first for the Spanish royal family. The announcement cast a long shadow over Felipe’s first Christmas speech as king and has been causing embarrassing headlines for the Spanish royal family all year. In another move to reverse the commonly held view of the royal family as a bunch of freeloaders, Felipe announced in December 2014 that members of the royal family were no longer allowed to accept expensive gifts, including free flights and favours that “could compromise the dignity of the institution”.

The shadow of Juan Carlos – MISS King Juan Carlos may have abdicated, but his legacy as a blunder-hit royal continues. This year, despite trying to keep a low profile, Felipe’s father has been embroiled in a paternity claim as well as facing fresh allegations of a long running affair in a sensational new book that has been flying off the shelves in Spain. The first commemorative coin to bare the face of Spain’s new monarch caused controversy by declaring “70 years of peace” in Europe. The coin was made in celebration of 70 years since the end of the Second World War but many Spaniards argued that Spain was far from living in peace during the 36 year fascist dictatorship of General Francisco Franco. In December 2014, the Spanish government launched a new transparency portal, partly in response to a series of corruption cases that had seriously eroded the trust ordinary Spaniards had in their politicians and monarchy. Members of the public can access never before seen data on the Spanish royal family, as well as the government and various other public institutions.

A nephew looking for trouble – MISS Felipe’s nephew, Froilán has been nicknamed the royal bad boy and hopes that he might start behaving himself now he is fourth in line to the throne have been shattered. He shot himself in the foot (literally) as well as failed his end of year exams (twice), which got him kicked out of school. He recently hit the headlines after a “don’t you know who I am?” hissy fit in a Madrid theme park during which he hurled racist abuse at a teenager who asked him to queue up like everyone else. Not the best example of Spain's next generation of royals… Felipe has undoubtedly brought a new, modern face to the Spanish monarchy and Spaniards have welcomed the fresh new look of their royals. Felipe and Letizia are regularly referred to as “Europe’s best looking royals” and Queen Letizia is a regular in fashion pages around the world. Felipe has also been a uniting force; the entre royal family, including Juan Carlos and Queen Sofia (who, it is often rumoured, live separate lives) turned up for little Princess Leonor’s First Holy Communion in May. Compared to the rest of his gaffe-prone family, King Felipe’s misdemeanors are relatively tame. He provoked jokey comments on social media for him to abdicate after he admitted to workers at Spain’s transport ministry that he once received a parking fine from them “many years ago”.