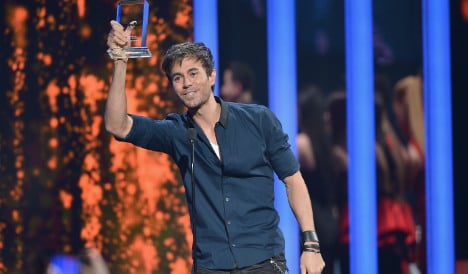 He proved that the show must go on after slicing his hand on a drone camera during a concert in Mexico on Saturday and playing on for a further half an hour. But his injuries turned out to be worse than first thought.

“His recent surgery lasted longer than expected since the damage ended up being a bit worse than initially assessed,” said a statement posted Tuesday on the Spanish-born, Miami-based singer's website.

“He suffered a fracture that needed to be corrected in addition to the reconstructive surgery. He will be recovering during the next few weeks, but a full recovery is anticipated,” it said.

The Grammy-winning singer, 40, was performing in front of thousands of fans in the northwestern Mexican city of Tijuana late Saturday when he tried to grab the camera-equipped drone — something he frequently does as part of his show — to give fans a closer look at what is happening on stage.

But the fun took a painful turn when he grabbed the wrong part of the aerial vehicle, slicing open several fingers on his right hand and ended up cutting short his show with his hand wrapped up in a bloody T-shirt.

“Something went wrong and he had an accident,” a representative for the singer revealed on Instagram.

Photos posted on social media after Saturday's concert at the Plaza de Toros de Playas in Tijuana appeared to show him with a bandaged right hand and a bloodied white T-shirt.

The Spanish-born. Miami-based star, on his “Sex and Love” tour, continued to perform for a further half an hour after the accident before flying to Los Angeles to see a specialist.

According to his press agent Joe Bonilla, Iglesias – the son of veteran Spanish crooner Julio – “decided to go on and continued playing for 30 minutes while the bleeding continued throughout the show”.

The 40-year-old was then “rushed to the airport where an ambulance met him [and he] was then put on a plane to LA to see a specialist.”

He is not scheduled to perform again until July 3 in Mexico City.