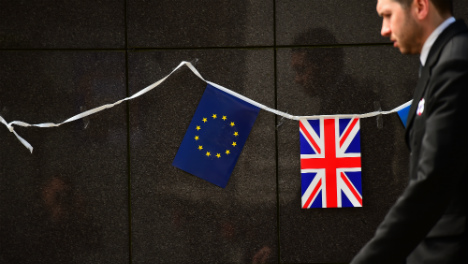 Not ALL British expats will be able to vote in the EU referendum. Photo: Emmanuel Dunand/AFP

The UK referendum bill published on Thursday failed to guarantee a vote for British expats living abroad beyond the 15-year benchmark, leaving them locked out of a process that could have very real implications on their own future.

OPINION Give us a vote: We've got most to lose if UK quits

In a worst case Brexit scenario, British residents in Spain would have to leave the country and re-apply for citizenship from the Spanish Embassy in the UK, a Spanish immigration lawyer has told The Local.

According to Thursday's referendum bill the simple question on the ballot paper will be “Should the United Kingdom remain a member of the European Union?” Voters will then be asked to answer “Yes” or “No”.

A statement from Downing Street said the vote represented “an important choice about our country’s destiny.”

“It will pave the way for the British people to have their say for the first time in 40 years on our place in the EU,” Downing Street said.

But the reality is, thousands of Britons who arguably have the most to lose if the “No” camp is triumphant, won't have their say in that choice.

Currently anyone who has been living abroad for 15 years or more is barred from voting in General Elections in Britain and the same rule will apply for the EU referendum, despite the result potentially having a direct impact on expats.

To twist the knife in even further the Conservative government has planned to scrap the 15-year rule at some point during Prime Minister David Cameron’s second term, but they seem unwilling to push this reform through in time for the referendum.

This stance has caused anger among the estimated one million British expats in Spain.

“There are few issues that unite ex-pats of all political colours like the unfairness of the 15-year rule,” Dr David Mathieson, a former UK government advisor living in Spain told The Local.

“Despite having lived happily in Spain for a long time many ex-pats are proud of their citizenship. They could have become Spanish nationals but choose to remain British – it remains an important part of their identity. Yet they are penalized for that choice,” he explained.

“Other countries do not treat their citizens like this – the French, for example, are allowed to vote in French elections wherever they live and for life,” he said.

“The British government should be ashamed of the way in which they treat this important group of British citizens,” Mathieson added.

But some Brits in the UK think it is only fair that those fellow countrymen who have been abroad longer than 15 years cannot vote. Indeed, they would go one step further, suggesting that no British residents abroad should get a vote:

“You have already elected to be a “citizen” of the EU so you should not get to vote on a British matter,” Ivan Burrows wrote on The Local Spain’s Facebook page.

“Those directly affected and living in Great Britain should decide, whether people in the EU want us in or out of the EU is irrelevant,” he added.

But according to Cath Evans, who commented on The Local’s Twitter, Brits across Spain are feeling “disenfranchised…we can’t vote in the 2015 general elections in either Spain or the UK, or the referendum.”

What will happen to Brits in Spain if Britain leaves the EU?

While the fate awaiting the estimated one million British people living in Spain is still unclear, a worst case scenario would mean British residents would have to leave the country and apply for a residency permit from the Spanish Embassy in the UK.

“If the UK leaves the EU, British citizens living in Spain will have to go back to Britain and start the procedure of residency at the Spanish Embassy in the UK, as a non-EU citizen,” Balcella International Lawyers Group, based in Barcelona, told The Local.

“As a non-EU citizen the process involves much more documentation and a higher proof of economic resources.”

British expats undoubtedly have the most to lose from the referendum, argues David Mathieson:

“British living abroad will probably be more affected by Britain leaving the EU than any other group of citizens in the UK. The common rules of the EU which allow us to all to live and work in each others countries will be torn up. Many of the things which we take for granted will become much more complicated,” he told The Local.

“British people may need to get work permits and be subject to quotas if we are outside the EU. Health care agreements for British people living in Spain will have to be renegotiated and it is possible that expats will need a special health insurance.

“There will be an added bureaucratic burden to everything from buying a house or car to registering kids for school will be more difficult. Anyone who thinks that the famous 'tramites' in Spain are already a bit of a burden just wait – 'you aint seen nothing yet' if Britain is outside the EU‏,” said Mathieson.

British expat Joan Skelton Smith is among the many that fears a Brexit could be very detrimental to her and her husband’s future as well as that of their children and grandchildren.

“No one seems to know what the effects of a Brexit would be on British expats but I like many am concerned about my health care and pension benefits as well as losing my right to vote in UK and EU elections,” she told The Local.

“I am also concerned about what the effects would be for our British children working in the EU and our Swiss son-in-law working in the UK.  I think the world needs more cooperation and less isolationism,” she said.

“The UK government like all nations has a responsibility to protect the interests of all UK citizens not only those currently resident within the UK,” she said.