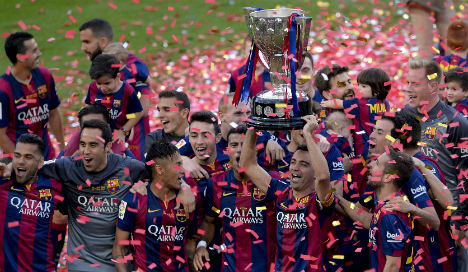 Barcelona after winning the Spanish league on May 23rd. Photo: Josep Lago/AFP

It is the third meeting between the two sides in the final in the past seven years with Barca emerging victorious on their way to their first treble in 2009 and in Pep Guardiola's final match as Barca coach in 2012.

Saturday will also see the Camp Nou say goodbye to another club legend as Xavi Hernandez plays his final game on home soil before his farewell in the Champions League final against Juventus on June 6th.

“We are very proud to have won La Liga and now comes the Cup final, which although it seems like a minor trophy, matters just as much to us as the Champions League final,” said Barca defender Gerard Pique.

“It is another title in the club's museum and here at Barca we only know how to win.”

Pique's return to his best form over the past six months has been key to Barca's run of 29th wins in 33 games that has left them on the brink of glory in all competitions this season.

Barca conceded just 21 goals in 38 La Liga matches and have improved markedly on set-pieces under Luis Enrique this campaign.

However, he understands why his displays have been overshadowed by the stunning form of Lionel Messi, Neymar and Luis Suarez, who have combined for 117 goals between them.

“When you win people always look to the strikers and when you lose to the defenders, goalkeeper and coach,” added the Spanish international.

“This happens in all the big clubs and is normal. We have three of the best players in the world up front, they understand each other perfectly and are playing marvellously.”

In contrast to Barca's treble chase, Athletic are searching for their first major trophy in 21 years since doing the league and Cup double in 1983/84.

The Basques have already suffered at the hands of Messi this season as he played a part in all five of Barca's goals in a 5-2 thrashing at San Mames in February.

However, Ernesto Valverde's men improved significantly from a disappointing first half of the campaign to ensure qualification for next season's Europa League and go into the final on an unbeaten seven-match run.

“We deserve a victory. We are going to give them a very hard game.”

Barca received a huge boost with the news that Suarez will be fit to start having not featured since the second leg of their Champions League semi-final against Bayern Munich due to a hamstring problem.

Oscar de Marcos is suspended for Athletic so Andoni Iraola will start at right-back on his farewell after 12 years and nearly 500 appearances.

And Barcelona-target Aymeric Laporte believes overcoming the pre-match nerves will key for Valverde's men with Athletic fans expected to fill more than half of the 99,000 seats at the Camp Nou.

“We must know how to overcome the pressure and the nerves. We know that Barcelona is a very good team and we have to think about what we have to do to play well.

“There is so much talent in their team we have to be vigilant to every move.”