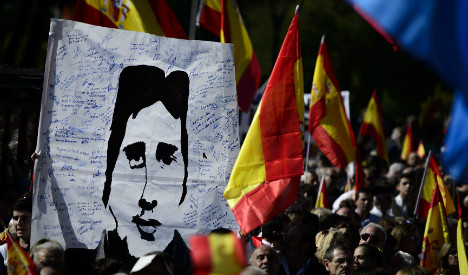 Protestors holding a picture of Spanish politician Miguel Angel Blanco, who was kidnapped and murdered by Eta in 1997. Photo: Dani Pozo/AFP

Vicente M.I. was sentenced to two years for glorifying terrorism after writing a Facebook post about Miguel Ángel Blanco, a Spanish politician who was murdered by Basque terrorist group Eta in 1997.

Vicente, 21, from Valencia, posted a message on January 17th 2014 under the name of 'Vicent Sidorenko' which read:

Miguel Ángel Blanco, a Popular Party politician, was kidnapped aged 29 on July 10th 1997 by Eta, who threatened to assassinate him if all Eta prisoners were not transferred to prisons in the Basque Country within 48 hours.

Less than an hour after the deadline expired, he was shot in the back of the head and dumped on the outskirts of San Sebastian, where he was found close to death. He died in hospital the next day.

Vicente M.I. pled guilty to charges and said that he had written the message in a moment of “hot-headed anger,” according to the Spanish Huffington Post. His Twitter account had recently been closed and he “could not think of anything else to put”.

He published another message on January 31st 2014 trivializing the kidnapping of Spanish prison officer José Antonio Ortega Lara, who was held by Eta for 532 days between 1996 and 1997.

Police found books by rapper Pablo Hásel in the accused house; Hásel was previously sentenced to two years in prison for inciting terrorism in several songs.

He is not the first person to be detained for online comments deemed sympathetic towards Eta.

A lead singer of a Spanish rock group was among 19 people arrested in May 2015 for writing disparaging comments about victims of terrorism on social networks.

The kidnapping and subsequent murder of Miguel Ángel Blanco sent shockwaves through the country, with over 2 million Spaniards taking to the streets across Spain to demand his release. Two of his kidnappers were put on trial in 2006, while a third committed suicide two years after the murder.