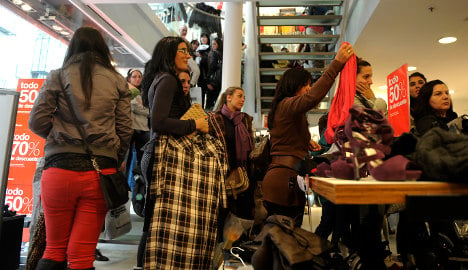 The Spanish National Institute of Statistics (INE) reported on Tuesday that the section of the population at risk of poverty had grown, with a particularly sharp increase in the number of children under 16 living in impoverished conditions.

According to INE data collected in 2014, the total number of people at risk of poverty reached 22.2 percent – the highest it has been since the start of the economic crisis in 2008.

After slowly declining in recent years, the percentage of children living below the poverty line saw a sharp increase, reaching a high of nearly one-third of children under the age of 16 (30.1 percent).

For 2014, the poverty threshold for a one-person household was €7,961 while households of two adults and two children under 14 years old had a threshold of €16,719.

Although Spain has seen positive indicators of economic growth in recent months, Moody's rating agency warned that its recovery could be thrown off course by political instability.

Moody's reported on Tuesday that Spain's economy is expected to grow by 2.7 percent in 2015 and 2.2 percent in 2016, mainly due to domestic demand, private consumption and investments.

The agency also said that structural reforms have helped Spain to strengthen its institutions, bank and the labour market.

But, the agency warned that there was still “uncertainty” for the coming years due to the country's “fluid political environment”.

“While the rating agency does not foresee a disruptive change in economic policies after national elections, it may be more challenging to pass legislation during the next administration,” the report said.

“As such, there is a risk of a slowdown in the reform momentum experienced during the current administration.”

Moody's also said that the country's high debt levels could be holding it back from further growth.

“Spain's high debt levels continue to represent a constraint on its sovereign rating, despite the recent improving trends of economic, fiscal and financial data,” Moody's said. “Under its current base case assumptions, the debt ratio will peak in 2016 at above 100% of GDP and stabilise through 2018, assuming a continued economic recovery and continued fiscal consolidation.”

Spain has shown some promising signs of economic recovery with the INE reporting last month that the country's economy grew for the seventh consecutive time in the first quarter of 2015.

Government data released at the beginning of May showed that Spain registered its steepest decline in the number of jobless people for April in almost two decades.

Prime minister Mariano Rajoy had warned at the end of last month that political instability threatened the country's economic recovery.