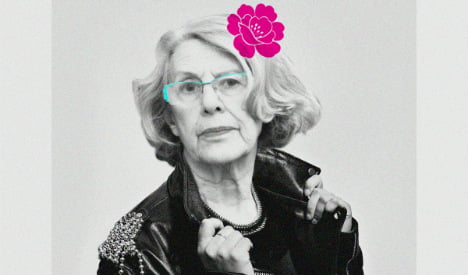 An image of Manuela Carmen from the #MadridconManuela campaign

The anti-austerity candidate took 31.8 percent of the vote and has  just under three weeks to forge an alliance to take control of the conservative stronghold after her party, Ahora Madrid, won 20 seats in the council elections on Sunday.

She has said that her Podemos backed party is open to striking a coalition deal with other leftist parties including the Socialist PSOE which would secure the 29 seats needed to rule the council.

It will leave Esperanza Aguirre, a veteran politican with a fervent admiration for Margaret Thatcher, out in the cold after she failed to secure an absolute majority.

The former president of the Madrid region for the PP, who stepped back into politics to run for mayor in the capital, won only 21 seats in a drubbing for the ruling conservatives that was echoed in town halls and regions across Spain. Carmena's campaign has seen her transformed from a virtual unknown to a familiar face across the city thanks in large part to a group of young graphic designers and artists who flooded social networks with her image, posting it with the hashtag #madridconmanuela.

Street art has been dedicated to her and video montages made of her image and set to music have all helped her to become an icon of change among Madrid’s indignant youth.

Ahora Madrid promised a left-wing manifesto focusing on transparency, with an audit of the city’s public debt, tax hikes on big businesses and the Catholic Church and taking public services out of private hands. It also promised to lower the price of public transport.

The group announced that five points would be made a priority under Carmena and “would be implemented within the first 100 days of the municipal government”.

These included guaranteeing basic utilities (water and electricity) to all households, guaranteeing access to healthcare services for all, developing an emergency job creation plan for the young and long-term unemployed.

On Tuesday Carmena was already meeting with judicial authorities to discuss the halting of evictions of indebted homeowners.