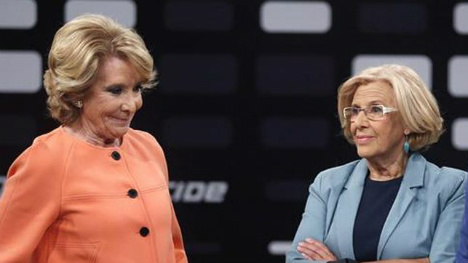 An ex-communist retired judge is locked in a showdown with a countess for control of Madrid city hall in an election that could deal a stunning blow to Spain's leaders.

The ruling Popular Party candidate Esperanza Aguirre, 63 and a countess by marriage, squeaked ahead in Sunday's vote, winning 21 council seats in the city her party has run for 23 years.

Aguirre is seen as a hard case in a party with its share of strong personalities — but she got a run for her money from “Indignada” candidate and fellow blonde grandmother Manuela Carmena.

The 71-year-old was quietly enjoying her retirement last year when friends of the protest party Podemos called asking her to run for mayor of Madrid.

At first she told them she was too old, but they were keen for the gravitas she would bring after a career spent defending the labour movement under the Franco dictatorship and later as a UN human rights rapporteur.

“The calls started getting more frequent. Friends started telling me: 'Get involved, girl. They need someone with experience and lots of ideas'.”

Months later, she was standing hearing the cheers of supporters yelling “Manuela for mayor!”

Manuela led Ahora Madrid, a group spawned by the anti-austerity “Indignado” street protest movement that made front pages worldwide in 2011, and fully backed by Podemos, the movement's political heir.

Her team won 20 council seats to Aguirre's 21 and she could yet beat her to the mayor's seat if she forges an alliance with the mainstream opposition Socialists, who came third.

“We elderly people do not have a future, but we do have a past and I want to dedicate it to you, the young people,” she was quoted as saying in a recent interview with online newspaper El Confidencial.

Aguirre almost went to court for driving away when policemen questioned her over a parking infraction in Madrid last year.

She bounced back from that run-in ahead of the May 24 city election, appearing in public walking her Jack Russell dog, Pecas, and in traditional costume at Madrid's annual folk festival.

The run-in summed up the defiant style of Aguirre, an avowed admirer of the late British prime minister Margaret Thatcher.

Aguirre clashed in a tart televised debate with the softly-spoken Carmena ahead of Sunday's vote.

With a piercing gaze through her spectacles, Carmena blasted Aguirre and her party.  “I don't understand, Esperanza, why you still want to govern after all the dreadful harm you have done.”

Aguirre dismissed Carmena's social policies, witheringly telling her: “You do not have the monopoly of compassion.”

Among other campaign pledges, Carmena has promised to stamp out corruption, develop public transport, increase subsidies for poor families and slash the mayor's salary by more than half.

Her mild demeanour belies her serious and sometimes dangerous past.

She was branded a “red” as a member of the outlawed Communist party under dictator General Francisco Franco.

She gets around on a bicycle these days but once had to go everywhere with a bodyguard.

A far-right group launched an attack on her firm in 1977 which killed several of her colleagues.

When Aguirre accused her of freeing from prison a member of the armed Basque separatist group ETA, Carmena retorted that she herself had also been named as a target by the group.

In 2008 she was in Bombay during a wave of deadly Islamist attacks that struck the hotel she was staying in on an official visit. She described walking barefoot through pools of blood to escape.

Three years earlier she had emerged unhurt along with Prime Minister Mariano Rajoy from a helicopter crash.

In her campaign for mayor she promised to defend businesses and said public services should be provided “at the lowest cost possible”.