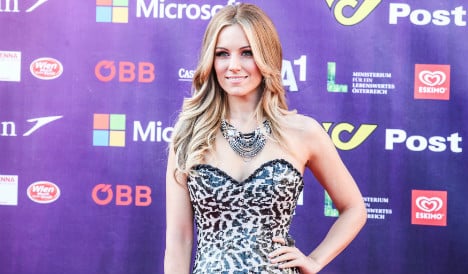 The 29-year-old songstress, who rose to fame after taking part in Spanish reality television programme, Operación Triunfo, is hoping for 12 points in Vienna on Saturday, May 23rd, when she competes for Spain in the 60th Eurovision Song Contest with her dramatic ballad, Amanecer (Dawn). The song has already reached number three in the Spanish charts and Edurne is no doubt hoping to replicate her success across Europe after Saturday’s long awaited song contest, which will be broadcast live across the world from Vienna's Stadthalle.

While the majority of countries will have to take part in a gruelling semi-final, the first of which will be held tonight, Edurne is lucky enough to come from one of the “big five” countries (Spain, France, Germany, Italy and the UK), those that contribute the most money to Eurovision and see their acts progress automatically to the finals. Spanish media are reporting that the blonde bombshell’s outfit will be the most expensive ever worn by a Spanish Eurovision entrant, including a dress costing €150,000 ($168,000). It is rumoured that she will begin the song wearing a long red dress, complete with cape, only to shed the outfit halfway through, revealing a gold sequined number underneath.

Edurne, whose full name is Edurne García Almagro, is no stranger to performing; born in Madrid on December 22nd 1986, she took her first steps onto the stage at the tender age of nine as part of children’s musical group, Trastos.

She auditioned for Operación Triunfo, the Spanish version of the X Factor, in 2005, finishing in sixth place.

Since 2006 she has released five albums and had a string of hits in Spain, as well as duetting with English singer Olly Murs on his single “Hand on Heart” in 2006 and featuring on the Spanish soundtrack to 2015’s live action Hollywood version of Cinderella.

She provoked controversy recently when she was less than flattering about Manchester, prompting a local councillor to offer to give her and her footballer boyfriend a tour of the highlights of the city.

She also came under fire from animal rights campaigners who questioned the use of a live tiger in the video for her Eurovision hit, Amanecer.

Meet Austria's Eurovision act, they might have beards, but they're no Conchita Wurst…