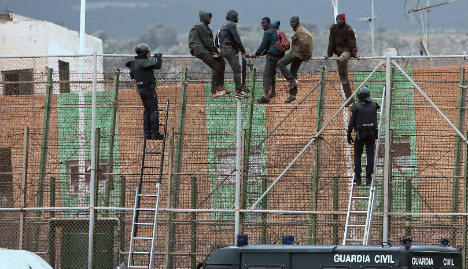 The European Commission last week unveiled a series of measures in response to a flood of migrants arriving on its southern shores, including compulsory quotas.

EU defence and foreign ministers were expected to approve the proposals in Brussels later on Monday, paving the way for an equally controversial military option to destroy people smuggler boats.

Arriving for the talks, Spanish Foreign Minister Jose Manuel Garcia Margallo said the Commission's call for solidarity had to be “proportionate, just and realistic”.

However, it took no account of Spain's very high unemployment rate, its previous efforts to absorb asylum seekers and the “huge effort we are making to control migration from Morocco, Mauritania and Senegal which impacts the whole EU”, Margallo said.

Under the EU's quota plan, the 28 member states would be required to accept asylum seekers relative to size of the economy, population and unemployment, among other factors.

Britain has opposed the quota system from the start, saying that while it will help with the humanitarian rescue mission at sea, all migrants must be taken to the nearest country for processing.

Hungary, Poland, the Czech Republic, Estonia, Latvia, Lithuania and Slovakia have all taken a similar hardline stand, and were joined over the weekend by France.

The European Commission argues that quotas are essential to solving the problem, with Italy, Greece, Cyprus and Malta all bearing the brunt of the influx of migrants fleeing war and poverty in Africa and the Middle East.