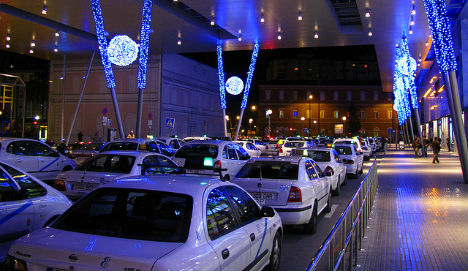 Francisco Diéguez, 50, who earns just €900 euros a month as an employee of a taxi firm in Malaga and said he can barely make ends meet at the end of each month, discovered the bag left by tourists in the back of his cab.

He worked out that the backpack had been left in his cab a couple of days previously when he picked up an American couple from the Maria Zambrano station and dropped them off on Calle Fraile, a short drive away.

He returned to the area and asked around the hotels, but no one could help him identify its owners. Then, when he reported the find to the local police station, he discovered that they had made a full police report.

The bag belonged to a 60-year-old American firefighter who had already returned home at the end of his holiday. But he was so pleased to learn that his belongings had been recovered that he flew back to Malaga to collect them and meet the hero taxi driver responsible for handing them in.

“He hugged me and said I was a saint, the cabbie of the year,” said Diéguez. “He insisted on giving me €320 as a thank you.”

Unfortunately Diéguez was told the next day that his contract with the taxi firm would end at the end of the month.

“My boss has sold the business and as from the end of May, I will be out of work,” he told Diario Sur. “But I don’t regret handing in the bag. Even if it had been a lot more, I would have done the same.

“When I told my wife she agreed with me,” he explained. “We said we are fools, but we have to do it.”