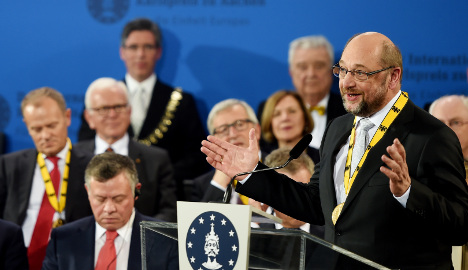 Spanish EU Parliament member Enrique Calvet Chambon posted on Facebook on Monday that Schulz had written him a letter, acknowledging the error.

Calvet had written a complaint about official Parliament documents which included Catalonia alongside the 28 member states as if it were its own country.

Agendas distributed to representatives with the contact details of national parliaments in each country had also included information for the Catalan parliament, which Calvet said “seemed to grant this regional parliament with the status of a nation” and was unfair to other regions.

“This is a serious error with serious political consequences and unfortunate discrimination for other Spanish and European regions,” Calvet wrote on Facebook.

“Given this incomprehensible error that had apparently gone unnoticed for some time, I fulfilled my political duty of defending the unity and equality of Spanish citizens and respect for European regions and raised a complaint with the President of the European Parliament with a successful outcome.”
In response, Schulz wrote to Calvet personally that it was an “unfortunate error” and an EU department had “immediately begun an internal investigation into the causes of the erroneous insertion of the Catalan parliament in the information included at the end of the 2015 planner distributed to MEPs”.
“I would therefore like to thank you for detecting and letting us know about this error, which will allow the EP's services to correct it for future editions, starting with the 2016 one which will enter production this summer,” Schulz wrote.
Just last week, Schulz received Germany's prestigious Charlemagne Prize for his work towards building European unification.