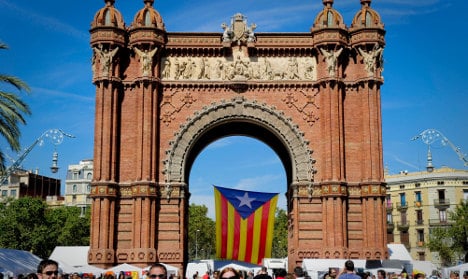 Nearly 400 flags were found across 323 municipalities, most of which were flying in streets or roundabouts, Spanish newspaper El Pais reported on Thursday.

The electoral board's order has angered those within the independence movement. Catalan nationalist electoral alliance Convergència did not give immediate comment, but sources told El Pais that they wanted to appeal the order.

Members of the Catalan National Assembly invited citizens to hang the flag from their balconies in protest of the ban.

The board's decision followed a request from anti-secession group Societat Civil Catalana, which called for the ban in order to respect “public authorities' obligation to be neutral”.

The ban is not against all public spaces, rather it is aimed at voting centers and public buildings such as town halls, fire stations and libraries.

Some say the ban and so-called “war of flags” could rile up more support for secessionists.

Catalan nationalists have outlined a plan to secede from Spain in 2017 if independence movements win a September regional vote.