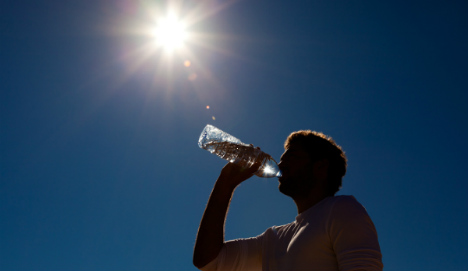 Photo of a man in the hot sun:Shutterstock

It has been the hottest May on record in Catalonia, with the region basking under unseasonably sizzling temperatures.

Temperatures of 36.6C were registered in Sant Romà d’Abella in Lleida and 36.1C in Tarragona while Barcelona recorded temperatures as high as 36C.

The previous highest temperature recorded in Barcelona, since records began over 100 years ago, was 34.9C, recorded on May 9th 1912.

That record has been shattered this week as a heatwave has swept across the country which saw a construction worker die from heat stroke in Badajoz, near the Portuguese border.

Juan Francisco Díaz, 32, collapsed while digging a ditch at a country house a few kilometres from Badajoz in temperatures of over 35C. He was taken to hospital but doctors could not save his life.

According to Quim Cot, from Catalonia’s meteorological agency (SMC), recent temperatures are definitely “unusual” for May and an indication that summer is starting earlier and earlier, but he stopped short of blaming the heatwave on climate change.

He did tell news agency EFE, however, that average temperatures were predicted to continue to rise over the coming years.

Cot explained that the heatwave currently baking Spain is due to a mass of hot air from North Africa.

But Catalan’s better make the most of the high temperatures; a cool front will see temperatures return to normal from Friday, cooling the region considerably.

The hottest spot in Spain so far this year was Lanzarote where a temperature of 42.4C was recorded at the airport on Wednesday.

Authorities have placed 33 provinces across Spain on alert, while Valencia is on “red alert” with temperatures expected to reach 42 degrees. Alicante is on “orange alert” with the thermometer predicted to top 39 C.