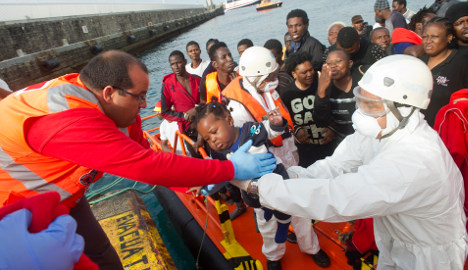 A coast guard member is handed a rescued African migrant infant by a member of the Red Cross in the port of Tarifa. Photo: Marcos Moreno / AFP.

Spain granted asylum to 1,600 people last year – less than 1 percent of the EU total of 184,665, according to Eurostat data released on Tuesday.

The low figure reflects the fact that Spain received far fewer asylum applicants in total compared to its counterparts with about 5,600 people applying.

In comparison, France and Italy each received more than 64,000 applications.

Germany received the highest number of asylum seekers at more than 200,000 applicants.

Spain has also been criticized for its border policies by the Council of Europe and several human rights associations. The European Commission called on Spain last month to stop immediately deporting migrants trying to enter its north African territories and allow them to present asylum requests at border crossings.

The data on asylum protection grants was published a day before the European Commission presented its migration action plan on Wednesday. In response to the influx of migrants seeking to reach the continent, the plan includes beefed-up European border protections and quotas for the number of migrants each country should take in, seen as a way to share the responsibility fairly.

“The plight of thousands of migrants putting their lives in peril to cross the Mediterranean has shocked.

“It is clear that no EU country can or should be left alone to address huge migratory pressures,” the Commission wrote in its report.

The total of 1,600 people granted asylum last year in Spain was less than half of the 3,620 asylum cases that had been decided as of the latest analysis.

Forty-four percent of people were granted protection on their first asylum application attempt while only 15 percent of appeal cases received positive outcomes.

Still, Spain's acceptance rate was not far behind the European Union average. Of the 358,365 cases that had been decided across the EU, about 185,000 people – or slightly more than half – were granted protection status. Forty-five percent of asylum seekers received protection in their first attempt on average in the EU, while 18 percent had positive outcomes in their appeal cases.

Germany accepted the greatest share of asylum seekers – more than 47,000 people as of the latest analysis and a quarter of the EU total, though its acceptance rate was similar to Spain's at less than 50 percent.

The Commission plan on Wednesday came amid concerns at the growing numbers of refugees, especially from war-torn countries like Syria, after weeks in which hundreds have died attempting to cross the Mediterranean Sea by boat to reach the continent.
Other proposals within the plan include better targeting of people smugglers, whose unsafe and over-crowded boats have been blamed for recent tragedies, and expanding resources for search and rescue.
It also calls for better methods for identifying migrants, improving ways for qualified immigrant workers to get jobs, and monitoring those whose applications are rejected to ensure they make it home.

Even more ambitious are proposals for finding ways to solve the problems that cause people to flee in the first place. The Commission calls for building “stronger partnerships with key countries outside the EU”.