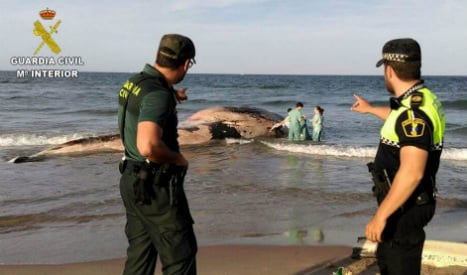 The whale washed up on a beach near Valencia on Tuesday. Photo: Guardia Civil

The whale was spotted in shallow waters by a Maritime Service patrol at around 11am on Monday May 12th.

They deployed a boat to make sure that no vessels collided with the six tonne, ten metre long animal.

At around 4.30pm the animal washed up on Pollo beach in the town of Cullera, near Valencia. According to Civil Guard sources the mammal was already dead when it washed up onto the beach.

The Civil Guard informed the Department of Zoology at the University of Valencia that the animal would be moved from the beach and an expert helped undertake an analysis of the whale as well as its successful removal from the beach.