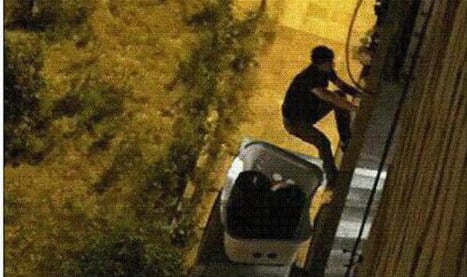 The thief was caught on camera as he attempted to evade capture. Photo: Policia Nacional

A thief who was dubbed “the spiderman of Coslada”  because of a crime spree that saw him scaling the outside of buildings  in the Madrid subrub has been arrested.

The 30-year-old man is thought to be behind a spate of burglaries in the Madrid municaplities of Coslada, Hortaleza and Barajas over the last few months.

According to a statement by Spain’s national police the thief had a certain modus operandi. “He scaled walls to the first floor and entered apartments where the shutters and windows were open to steal cash, mobile phones and electronic goods.”

He was photographed scaling the outside of an apartment block by a resident who handed the image to police and he was arrested in the early hours of Sunday morning.