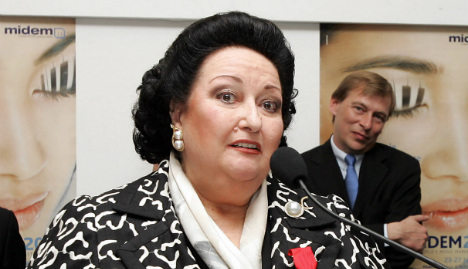 Montserrat Caballé, who failed to turn up to court on tax fraud charges. Photo: Pascal Guyot/AFP

The opera singer, who rose to fame after duetting with Freddy Mercury on the 1987 hit Barcelona, was supposed to be in court on Tuesday May 23th on tax fraud charges.

She did not declare her earnings in 2010, listing her official residence as being in the tiny Pyrenean country of Andorra “for the sole purpose of not paying her taxes” according to the prosecution.

Today’s court date was to see the singer pleading guilty to tax fraud, as well as accepting the six month suspended prison sentence.

The Spanish soprano has suffered a series of setbacks during the process, losing her lawyer last week, who spoke of his “disagreements” with his client before finally announcing he would no longer represent the singer because he had “lost confidence” in her.

Court sources told Catalan daily, La Vanguardia, that they did not know why Caballé had not shown up to her court hearing, which was suspended and will be rescheduled.