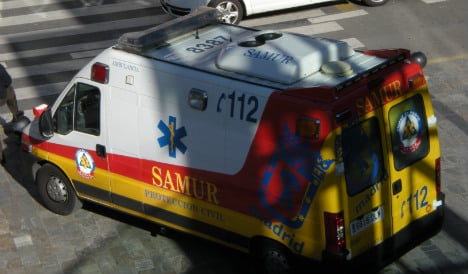 The child was taken to hospital by SAMUR. Archive photo: M.Peinado / Wikimedia

Tha fall occurred around 6pm on Monday evening. The baby of one year fell from the window of the seventh floor flat but the circumstances as to how that happened have not yet been made clear.

Luckily, his fall was broken when he landed on a thick hedge.

Residents of the block in Callao de Fuenlabrada have called it a “miracle” after the tot appeared to have little sign of injury, according to a report on Antena 3 television channel.

But the baby, who has not been named in the press, was transferred by ambulance to the local hospital where he is being treated in intensive care.

A spokesman for the Octubre 12 Hospital told The Local: “The child of one year old is in a serious but stable condition, but we can’t say more on the request of the family.”