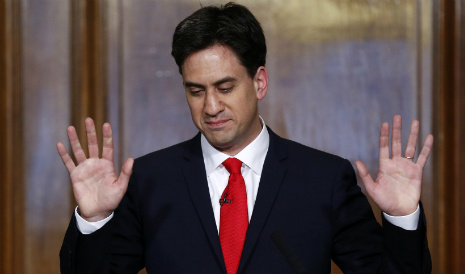 After five years at the helm, Miliband led the Labour party to defeat last week in the UK General Election handing the Conservative party and Prime Minister David Cameron a surprise absolute majority.

In his resignation speech last Friday, Miliband said he was looking forward to “reacquainting” himself with his wife, Justine, and their two children. And he has chosen the delightful Balearic Island of Ibiza to do so. But aside from Ibiza being an ideal place to take a family holiday it also offers a few other opportunities that might suit his particular needs right now.

Now no-one is commenting on his every move, Ed can enjoy a bacon sandwich, or better yet, a full English breakfast, in peace. We suggest Mel’s English bar in Santa Eulalia which is one of the best rated on TripAdvisor and offers all day English breakfasts.

We suggest that Ed shuns the stiff suit and let his inner hippy out on his trip to Ibiza. A visit to Punta Arabí hippy market is sure to dredge up some gems and you never know, next time we see Ed, he might be sporting a sarong and a wooden bangle or two.

Forget all his woes at Amnesia

While not renowned for his love of clubbing, we reckon a good night out will do Ed the world of good. And what better place to forget all of his troubles than Amnesia.

If Ed doesn't fancy being recognized and posing for the selfies that plaqued his campaigning then there is no better disguise than a mask and wetsuit as he explores the depths of the Mediterranean.

Bury his head in the sand on Cala Comte

Ed needs to chill, so we suggest doing so on Cala Comte, one of Spain’s top ten beaches. Somewhat more imposing than Ed’s stone slab with his list of now defunct electoral pledges, Es Vedra, an official nature reserve, is a 400 metre high rock, 3km out to sea. We advise Ed to visit at sunset for unforgettable views that are guaranteed to take his weary mind off election defeat, and hopefully won’t bring back terrible memories of his own foray into stone masonry.

Beat out his stress at a drumming party

Every Sunday morning Benirras beach plays host to dozens of hippies playing drums. Ed should join in, they do say drumming is a great way to let out pent up frustration.