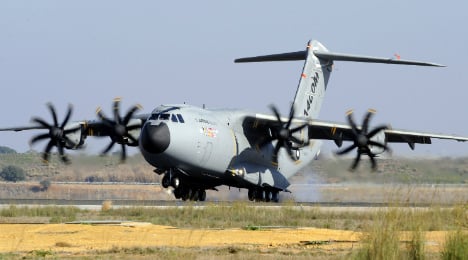 An Airbus A400M landing in Seville in 2009. Photo: Bertrand Guay/AFP

Mariano Rajoy hailed as heroes the farm workers who rushed to the crash scene and helped pull out two survivors after the military transport plane crashed in a field near Seville's airport.

He posted a photograph of himself with one of the workers calling him "a hero for us all".

Britain, Germany and Turkey said on Sunday they were temporarily grounding their Airbus A400M military transport planes after one crashed near Seville airport in southern Spain during a test flight.

France, which has six of the planes, said it would only carry out "top priority flights" with A400M until more facts emerge on what caused the accident.

The wave of groundings prompted Spain's Defence Minister Pedro Morenes, speaking at an EU meeting in western France, to urge countries not to make "hasty conclusions" before the investigation into the crash was complete.

"One must not fall into easy criticism of a company which has shown itself to be extremely dynamic and competitive," Morenes said.

At least four people were killed Saturday when an A400M crashed in the first fatal incident involving the new troop and vehicle transporter manufactured by European aerospace group Airbus.

A spokesman for the German armed forces told AFP they had decided to "suspend until further notice the test flights of the German defence forces' sole A400M."

The spokesman added that "since its delivery in December the plane "has been in the air on a regular basis".

"Now we are awaiting results from Airbus on why the A400M crashed near Seville. We are in constant contact with Airbus."

Britain's Ministry of Defence earlier said in a statement that "as a precaution" its two A400M aircraft "are temporarily paused."

Turkey also announced it had suspended flights of its A400Ms.

"Turkey's air force has temporarily suspended the flights of its two Airbus A400M after the fatal crash of a similar type of aircraft in southern Spain," state-run Anatolia news agency reported on Sunday.

The planes have been temporarily grounded as part of "security measures," said Anatolia.

France meanwhile said it had "no facts compelling us to ground our A400M fleet."

French air force spokesman Colonel Jean-Pascal Breton told AFP said that technically, the planes conformed to army requirements and while the army would not skip over security issues "we don't have any reasons to ground the fleet at this stage."

However French Defence Minister Jean-Yves Le Drian later told the media that only the most urgent operations using the A400 were being authorised.

He also expressed his support for Airbus amid the wave of groundings of an aircraft he said was "of very high quality" with over 1,700 flight hours with the French air force.

Authorities are still trying to establish how many people were aboard the plane when it went down in a non-residential area around a mile from Seville airport on Saturday.

Airbus Defence and Space, the division responsible for military aircraft, said the plane had been heading for Turkey.

The group sent a team of experts to the crash scene.

The first of the A400Ms was delivered in 2013 to France which now has six.

Powered by four turbo-prop engines, the A400M is designed to transport troops and material, including armoured vehicles and helicopters, over great distances at high speeds.

Capable of transporting up to 37 tonnes over 3,300 kilometres, the A400M is still nimble enough to land on irregular terrain.