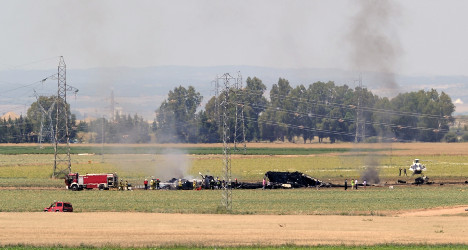 Smoke rises from the wreckage of the crashed plane. Photo: Christina Quicler/AFP

Andalusia's regional prefect Antonio Sanz, who heads the local administration, said a burnt body had been found in the wreckage, bringing the death toll to four.

The plane crashed in a field about a mile north of Seville airport at around midday.

Earlier Saturday, Spanish Prime Minister Mariano Rajoy had said there were between "eight to 10 people on board" the aircraft, but authorities are still trying to establish the number.

The crash prompted authorities to close the Seville airport for about an hour commercial flights.

Photographs taken from the scene of the crash showed smoke rising from the flattened wreckage of the aircraft.

Speaking on Tenerife, one of the Canary Islands, where he was attending a campaign meeting, Rajoy sent his condolences to the victims, Spanish news agencies reported.

Aviation sources confirmed the plane was one of Airbus' new A400M troop transporters, which are assembled at a factory in Seville.

Airbus Defence and Space, the Airbus division responsible for military aircraft, said the plane was destined for Turkey.

The group sent a team of experts to the crash site.

If confirmed as an accident, it would be the first since the aircraft,which was fraught by development and delivery delays, went into service.