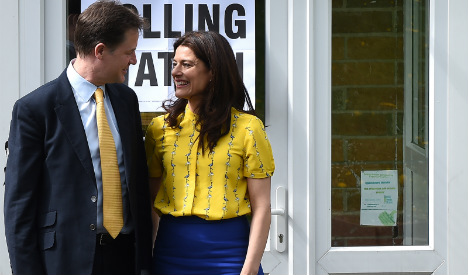 The deputy prime minister and his wife at the voting booth on Thursday. Photo: Paul Ellis/AFP

After a disastrous election night for his party, Liberal Democrat leader Nick Clegg has stepped down as party leader.

After five years of being at the side of the deputy Prime Minister, his stepping out of the political limelight will mean the UK will lose without doubt the coolest political wife it has ever seen. Miriam González Durántez, we’ll miss you! She speaks her mind

Born in Olmedo in Castille y Leon, the daughter of the mayor, González is no shrinking violet: she likes to speak her mind and unlike the other political wives, election campaigns are way down the list of her priorities. In 2010 she famously said she was "willing to help" with the campaign, but unlike the other two political wives, Samantha Cameron and Sarah Brown, would not be able to take time off work or from family life to take part.

To the ire of many a Liberal Democrat political advisor, González is always honest and open with the media, admitting at a recent charity event that: "I like risky ground. In fact, I much prefer risky ground to political advisers."

She famously questioned her own husband on men’s role in looking after children (see video, above), saying that men who care for children have "more cojones".

She is an inspiration to young girls González spearheaded the Inspiring Women initiative, which encourages successful women to go into state schools to talk to young girls, with the aim of helping them raise their aspirations and broaden their horizons.

During an April event for the initiative, she said, "I do believe in women speaking up and women like those here today inspiring a whole generation of women no matter what their background, country of origin, their age or their circumstances."

Sharing her tips for success, she said: "Dream high and work hard because no matter how high you dream, nothing happens without hard word and that is the principle that works in every single country." González is the antithesis of a boring political wife, favouring bright colours and bold fashion statements. Nowhere was this shown off more than at the royal wedding of Prince William and Catherine Middleton in 2011 (pictured above).

She channeled her Spanish roots with a polka dot grey and black suit by designer Miguel Palacia. Amid a sea of drab colours, Miriam upped the style stakes with a black turban and giant orange flower – definitely our pick for the most fashion-forward political wife.

Not only is González a partner in international law firm, Dechert, she is also a mother to three little boys.

During the campaign, she revealed that she runs a cookery blog with her three sons, on which they upload a variety of recipes, often Spanish inspired.

Yet again defying her husband's political advisers ("When they learn of this they're going to freak out!" she said) she revealed she was the author of an anonymous food blog "Mum and sons".

She has never allowed her children to be used in campaigning and they have not been photographed or filmed in the media.

She wears the trousers Although Nick Clegg has said he is a committed atheist, González made him promise to bring their three children up as Roman Catholics, hence why the deputy prime minister attends mass every Sunday. She also insisted that if their children were going to be saddled with the, somewhat inelegant surname, Clegg, they had to have Spanish first names. So thanks to their madre, little Antonio, Alberto and Miguel’s Spanish heritage will be kept very much alive.