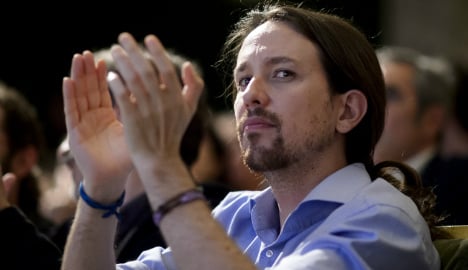 Podemos turned Spanish politics on its head by surging in the polls since its 2014 foundation, but recently ran into trouble with regional elections set for May 24th and a general vote due around November.

Earlier this year, Podemos topped some opinion polls, but the most recent surveys rank it in fourth place behind the country's two main parties and rival upstart Ciudadanos, which is competing for voters thirsty for change but who fear the hard left's tone.

This week, Podemos presented a preliminary manifesto heavy on social welfare but abandoning some earlier pledges and lacking detailed figures.

The plan promises a "citizens' bailout" consisting of social measures to help poor and working people.

It was launched on Tuesday at a theatre in Madrid by Podemos's pony-tailed leader Pablo Iglesias, a 36-year-old university lecturer.

He vows to stop evictions of homeowners ruined in the economic crisis and offers universal free healthcare and more investment in education — sectors hit by recent austerity measures.

The plan proposed a "new model of production" for a more environmentally friendly economy, promoting research and development and fighting corruption.

'Swerve to the centre'

Analysts said Podemos had meanwhile quietly dropped some of its earlier policies.

It had promised a "universal minimum income" for families without revenues, and said it would refuse to pay Spain's debts.

Those proposals, scorned by opponents, were missing from the new programme.

"This is a clear swerve towards the centre," said Antonio Roldan of the Eurasia Group think tank in London.

"They have abandoned all the more unviable measures."

Podemos has been criticised by opponents for not saying how it would fund its welfare policies.

This week's manifesto did not give detailed figures either — a Podemos spokeswoman told AFP it was just a "framework" plan.

Podemos has campaigned against corruption and public spending cuts in the recent years of economic crisis, which has driven unemployment up to nearly 24 percent at the last count.

The head of Podemos's economic section, Nacho Alvarez, insisted its vision was viable, based on boosting the economy by stimulating demand.

"We are in favour of balanced public finances, but the reduction in the public deficit must be subject to a reduction in unemployment," he said.

The programme "hides vital subjects such as the debt of the regions, and how to finance such an ambitious plan," wrote journalist Marisa Recuero in centre-right newspaper El Mundo.

In centre-left daily El Pais, commentator Javier Ayuso said the programme lacked detail on its economic plans and appealed above all to Podemos's base: the Indignant street protest movement in which the party is rooted.

According to the latest polls, Podemos has been overtaken by Ciudadanos (Citizens) in third place, with the governing Popular Party and opposition Socialists first and second.

Podemos has one ally in Syriza, the left-wing party that won power in Greece in January but is now struggling to push through its vows to renegotiate the country's debt.

Syriza's troubles have given ammunition to Podemos's own opponents, not least Spain's conservative government which boasts of its improving economic growth figures.

"The worst that can happen to a country is for it to lose its power to decide" due to outside financial pressures, he said. "Look what is happening in Greece."